The Daily Nexus
News
Democrats Discuss Healthcare Options Beyond ACA
November 13, 2013 at 5:00 am by Emani Oakley

The Campus Democrats held an event called “Healthcare For All” yesterday evening, discussing current American healthcare policy and the role of single-payer financing in such policy.

The event featured speaker Shannon Miller, a representative from the California healthcare advocacy organization Healthcare For All, which works to provide universal health care through single-payer financing. Hosted as part of Human Rights Week, the event took place from 8 p.m. to 9 p.m. at the University Center State Street Room. During her talk, Miller emphasized the idea of healthcare as a basic human need. In explaining the issue, Miller showed a short film about the idea behind the single-payer option.

In discussing healthcare issues, Miller said she still wanted let students know about all available healthcare options. She said healthcare policy is relevant to everyone since it can affect someone at any given time in their life, “It may not affect you now, but it may at some point in your life.”

In her presentation, Miller gave hypothetical situations and estimated how much people would have to pay under the Affordable Care Act (ACA). According to Miller, even those who qualify may still have to pay large amounts to receive care.

“The ACA plants the seed in Americans’ minds that they deserve healthcare,” Miller said. “A lot of people think that if they can’t afford it, they don’t deserve it.”

While Miller acknowledged that the recently embattled act, also known as Obamacare, does have many benefits, she said it still does not fix all the problems with our current healthcare system. Instead, she proposed a single-payer healthcare system and explained why it would be necessary, even with the ACA in effect. Specifically, she said the Affordable Care Act still leaves 31 million people uninsured and uncovered, remarking that such high numbers make up a whopping 10 percent of the U.S. population.

Mathew Burciaga, second-year history major and member of the Campus Democrats, said he personally connected with issue discussed, saying the singer-payer option that Miller discussed is “an incredibly viable alternative.” The information gives Burciaga a sigh of relief, as he said there are conditions under which the Affordable Care Act may not have provided him with the necessary coverage.

“As someone who knows people that don’t fall under the ACA or company provided health care plans, I just thought it was important to learn about it a bit more and learn for myself after I fall off of my parents’ insurance plans, and if I can’t afford healthcare,” Burciaga said.

President of Campus Democrats Nicole Wiegert said she feels dissatisfaction with the current state of the country’s healthcare system.

“There are a lot of people that aren’t covered under the new healthcare system, which is really unfortunate because there are so many people out there that could use it,” Wiegert said. “Pretty much every other developed country has some sort of government universal healthcare system. It’s ridiculous that the United States doesn’t.”

Third-year English and geography double major Ansel Lundberg, publicity chair for Campus Democrats and Human Rights Board, said healthcare is an important issue for students since they will eventually have to pay for insurance coverage or find some other way to get coverage.

“There are probably a good number of students who have the option of health insurance now. But if they don’t get a job after college, they won’t have health insurance,” Lundberg said. “So I think it’s important for them to realize that if these sorts of options were to become reality, then they would.”

However, Lundberg said many students very likely “confused” about healthcare possibilities in general, as he said some may believe universal healthcare coverage may not necessarily “be either efficient or feasible.” 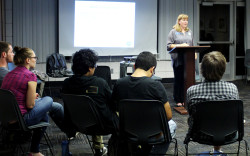 A version of this article appeared on page 4 of November 13, 2013’s print edition of the Daily Nexus.