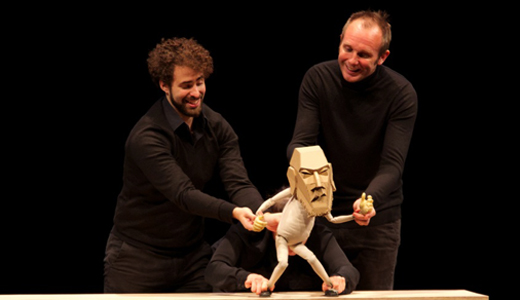 Blind Summit Theatre puppeteers Mark Down, Sean Garratt and Irena Stratieva hold Moses, a Bunraku puppet. In addition to their performance of The Table, the trio gave a seminar to UCSB acting students on Friday.

UCSB Arts &Lectures hosted the Santa Barbara debut performance of “The Table,” a show by the Blind Summit Theatre — a renowned puppetry group based in the United Kingdom — last week.

A trio of puppeteers — Mark Down, Sean Garratt and Irena Stratieva — used Moses, a two-foot-tall, Japanese-inspired Bunraku puppet with a cardboard head and a cantankerous personality, to shape an adult-themed comedic interpretation of the biblical story of Moses. In addition to the performances, Blind Summit Theatre gave a free two-hour seminar on Friday, instructing UCSB acting students on the art of puppetry.

Jeffrey Mills, lecturer in the Theater and Dance Department, was one of the instructors involved in the training and he hosted the workshop coaching students on stage movement. Mills, who is a theater director himself, said it is valuable for artists to offer insight on their work.

“It’s very important that the artists share something other than just the ‘one night’ show — to have a lasting impact on the communities they visit,” Mills said. “Usually when performing groups tour and get booked at universities and theaters in different cities, the presenting organization makes community outreach a part of the contract.”

He said the workshop provided students with an opportunity to expand their knowledge in theater, as well as their acting skills, since many elements of puppetry are similar to those in other forms of theater.

“Watching and working with artists of this caliber is great for our acting students because it teaches them that theater is basically a collaboration between performer and audience,” Mills said. “The audience is actively using their imaginations and endowing the puppet with life as much as the puppeteers are. This is true of all acting in live theater.”

According to Mills, the Blind Summit Theatre’s performance touched on key fundamentals of acting that require the actor to interact with and involve their audience.

“If we can learn, as actors, to relax and let the audience do their share of the heavy lifting, we will succeed as artists,” Mills said.

Gabrielle Korte, second-year B.F.A. acting student, said she found the workshop to be a good opportunity to enhance her own abilities.

“Their precision with their craft really made me appreciate puppetry as an art, and how it is such a dynamic performing art,” Korte said. “What I take away from the Blind Summit is that art demands a great amount of energy and focus when working as a team, when performing.”

“I’ve seen my fair share of live performances, but a live, professional puppet show was a novel experience for me,” Balestrieri said. “The performers did a great job of making the puppet move realistically, drawing the audience’s attention away from themselves and onto Moses [puppet].”

Korte said she hopes Arts and Lecture will provide more shows similar to The Table in the future, as well as plans for more workshops similar to the puppeteering seminar.

“I love one-man shows and experimental performances that push the boundaries and expand the mind,” Korte said. “I love workshops that help students experiment in art forms that they usually do not have the opportunity to participate in.”

Chelsea Williams, second-year B.F.A. acting student, said when she first sat down for the show, she imagined the “typical” scene of puppeteers, hiding behind a curtain making voices and motions for various dolls. However, Williams said, after the performance finished, she realized how unique of an art puppetry is really is.

According to Mills, The Table is the first puppet show he has seen Arts and Lectures host during his time here at UCSB. Mills said he believes puppetry is an ancient and mature art that should be presented to children and adults alike.

“Puppetry gets pigeon-holed in our culture as kids’ entertainment. But almost every world culture has a puppetry tradition,” Mills said. “Bringing inanimate objects to life and telling stories are as old and important as civilization itself.”

A version of this article appeared on page 3 of November 12th’s print edition of the Daily Nexus.