The Daily Nexus
News
Patricia MacCormack Talks About Ahuman Theory, Importance of Non-Speciecist Ways
November 6, 2013 at 5:00 am by Suzanne Becker

Scholar Patricia MacCormack spoke to a full audience about her recent work on an “ahuman” theory of ethics in the McCune Conference Room of the Humanities and Social Sciences Building yesterday.

The talk, entitled “Ethics, Animality and Ahuman Theory” is part of the Interdisciplinary Humanities Center The Value of Care series, which explores issues related to global well-being. Much of MacCormack’s talk focused on philosophical and moralistic reasons for radically deconstructing the idea of “human” and ceasing to use the word “animal” — ideas which she elaborated upon in her recent book Posthuman Ethics.

MacCormack is an English, communication, film and media professor at Anglia Ruskin University in the United Kingdom, and she introduced her analytical perspective as one that looks at evolutionist and speciesist claims, rather than taking a pro-animal rights position. Instead of attempting to “raise” non-human beings to have rights defined and granted by humans, ahuman theory takes an abolitionist stance against using the word “animal” or promoting the idea of “non-humans.”

IHC Director Susan Derwin said McCormack’s description of ahuman theory is important because it helps us think about how to relegate care.

“It’s impossible to think about care of others, much less to engage in caring practices, without assumptions about which subjects are deemed worthy of care,” Derwin said. “Insofar as Patricia McCormack queries the distinction between human and animal, and the way this distinction emerges from human discourse, she promises to expand our thinking about ethics of care, bringing to our attention the enslaving subjectification that regulates the relations between lives.”

MacCormack has been at UCSB since the beginning of the quarter, collaborating with Art professor Colin Gardner on a new anthology for Edinburgh University Press. Derwin said MacCormack’s “ethics of alterity,” or differentness, facilitates consideration of how those deemed unworthy of care are in a similar condition as those subjects who historically have been considered ‘non-human.’

According to MacCormack, ahuman theory seeks to avoid many pitfalls of speaking about the difference between animals and humans in ethical discourse.

“Ahuman verges on a nothing that includes everything,” MacCormack said. “It utilizes our animalness, in a non-speciecist way, to remind us there are escape routes from humanism — which may encourage ethical relations — but not by knowing, fetishizing, or making an idea or a concept of another animal. Simply because when there is no human, there is no deferral to human-signifying systems.”

MacCormack said only the term “human” needs to be deconstructed, as humans need to stop assimilating animals into human discourse. She said she would like to see humans “stop breeding,” while recognizing this would probably not happen in the near future. Citing a long history of atrocities committed by the human population upon the planet — in comparison to other life forms — MacCormack advocates focusing entirely on the condition of those currently alive.

“There are so many lives here and now that this obsession we have with the lives that don’t exist seems to me to be a little bit peculiar, and destructing,” McCormack said. “How are we caring for the lives now?”

Today, IFC will host National Book Award winner William T. Vollmann in the talk “Life as a Terrorist: The FBI and Me” at the McCune Conference Room of the HSSB at 4 p.m. 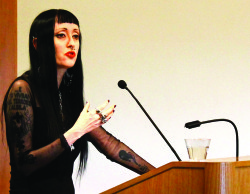 Patricia MacCormack is an english, communication, film and media professor at Anglia Ruskin University in the United Kingdom. She recently spoke to students in HSSB about her recent work on an “ahuman” theory of ethics.

A version of this article appeared on page 1 of the Wednesday, November 6, 2013 print edition of the Daily Nexus.