Speaking to a sold-out Campbell Hall, renowned historian Doris Kearns Goodwin came to campus last night to tell stories of three of America’s most lauded presidents, in the first stop of her five-week book tour.

Goodwin, who has authored several presidential biographies — including a Pulitzer Prize-winning book about Franklin and Eleanor Roosevelt — has written a new book entitled The Bully Pulpit: Theodore Roosevelt, William Howard Taft and the Golden Age of Journalism, which is set to reach bookstores tomorrow. She attended Colby College in Maine and earned her Ph.D. in government from Harvard University in 1968. During her lecture, Goodwin outlined three major qualities shared by three notable presidents whom she said possessed the recipe for strong leadership — Abraham Lincoln, Theodore Roosevelt and Franklin Delano Roosevelt.

According to Goodwin, her interest in the American presidency was first sparked by her time as an intern for Lyndon Johnson, at the age of 24. Although Goodwin did not work directly in Johnson’s office due to an article she wrote criticizing the president and the Vietnam War, Johnson still allowed her to work in his general vicinity, Goodwin said.

“I was certain he would kick me out of the program,” Goodwin said. “But to my surprise, he said ‘Oh, bring her in here for a year. If I can’t win her over, no one can.’”

There began Goodwin’s career as a presidential historian. In all her research, Goodwin said she has observed several commonalities between presidents of the past that correlate to their status as leaders.

“While problems change overtime, there are certain universal traits shared by all leaders, whether in public or private life,” Goodwin said.

The first of these qualities, Goodwin said, is the ability to overcome adversity and continue to “motivate oneself in the face of frustration.”

According to Goodwin, Lincoln, Roosevelt and F.D.R. all suffered some sort of personal strife and were therefore strengthened as people. Lincoln’s mother died when he was nine years old, and his political career was characterized by loss and failure before he reached the presidency. While Teddy Roosevelt suffered the death of both his wife and mother on the same day, and F.D.R. was stricken by Polio in his 30s, becoming partially paralyzed.

Using Lincoln as an example, Goodwin said triumph over hardship built the oldest president’s character and allowed him to beat his more politically experienced competitors for the presidential nomination.

The second common trait of strong leadership, according to Goodwin, is the ability to recognize both the challenges and opportunities of the era in which they rose to power. The three presidents Goodwin discussed were able to keep their critics close and transform them into allies, she said, quoting the words of Lyndon Johnson: “It’s better to have your enemies inside the tent, pissing at the ground, than outside the tent, pissing at you.”

Finally, Goodwin also said good leaders must have the ability to connect with their constituency, particularly in more personal ways.

“All three of these men were able to speak to their countrymen with stories, with everyday metaphors and with the beauty of language, when needed,” Goodwin said.

She finished her talk with a personal account of how her love of history was driven by her love of storytelling, which she developed by recounting Dodgers games to her father after his long workdays. In closing the talk with this personal sentiment, she began answering audience questions, addressing one audience member’s question about partisan lines that exist in Washington, D.C. today and how they have become increasingly polarized.

“What makes me sad is that I think it’s gotten immeasurably worse in the past 50 years,” Goodwin said. “It’s become so hard to really cross those party lines that people feel traitorous if they do so … it’s the most dysfunctional I’ve ever seen.”

Amidst the sea of gray and white hair that filled Campbell Hall, there was at least one student in attendance. Third-year English and geography double major Ansel Lundberg said he was interested in seeing Goodwin speak after her appearance on the Daily Show with Jon Stewart. Lundberg also said he found it interesting to look at history from such a narrative perspective, and that he felt Goodwin’s description of a good leader could be applied to current United States President Barack Obama.

“She kept talking about making rational, centrist decisions, and I think that embodies Obama,” Lundberg said. “He has issues … I feel like Obama is a product of campaign finance issues gone wrong, and he has foreign policy issues as well, but he’s a good leader.” 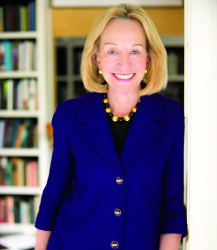 A version of this article appeared on page 1 of the Tuesday, November 5, 2013 print edition of the Daily Nexus.