After over five decades of community radio, UCSB’s own 91.9 KCSB-FM plans to debut their first record label, Bank Burner Records, with a show at Del Pueblo Café in Santa Barbara that will feature local surf rock band, Dante Elephante, next Saturday.

The event will also mark the debut of Dante Elephante’s self-named album — which is being sold as a limited edition seven-inch vinyl with an A-side entitled “Never Trust a Junkie” and a B-side called “Kogi.” The show will also include performances by Isla Vista-based group Sun Daes and Santa Rosa-based band, That Ghost.

KCSB General Manager Kyle Trager said the release of Bank Burner Records symbolizes an exciting new direction for KCSB. The radio station strives to feature local, underground talent so teaming up with Dante Elephante is the perfect move, according to Trager.

“This is the first thing that we’ve done like this — the first record we’ve put out,” Trager said. “I think there is a lot of interest in keeping this going. It represents something that is really important to us, as a station, which is promoting local, good music, and Dante Elephante is definitely local, good music.”

Ruben Zarate, lead singer of Dante Elephante, said he is excited to team up with KCSB because he has been listening to the station since his teen years.

“It’s pretty exciting,” Zarate said. “I’ve been a longtime listener of KCSB because I’m from Santa Barbara. Since I was like 14, when I joined my first band, that’s when I first noticed and found out about KCSB.”

“We’re bringing a local flare to something that goes beyond Santa Barbara,” Lipshin said. “It’s in line with our identity because they’re a group that is just starting.”

In an age of iPods and instant Internet downloads, the release of a vinyl record is not exactly a common occurrence, Zarate said. However, he said the vinyl is making a comeback, adding that it is better than mp3s or just downloaded music because “it’s just nice to have something physical in your hand.”

“I listen to it more than anything else,” Zarate said. “It may be harder in I.V. because if you have a house party, someone might thrash your vinyl. I [just] wouldn’t keep my record player in the living room.”

The band’s musical style is unlike a lot of commercialized, mainstream music, Lipshin said, which is why KCSB wants to promote their new label.

Enrique Arreola, manager of Del Pueblo Café, said he and his coworkers have been looking forward to the show since the restaurant rarely hosts such events.

“We have something like this only about once every two years, so it’s a special occasion,” Arreola said.

As for new music, Zarate said Dante Elephante will be recording a full-length album in November in Los Angeles, in collaboration with indie-rock guitarist Jonathan Rado of Foxygen. 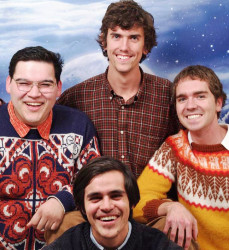 Dante Elephante will be playing at Del Pueblo Café Nov. 9. This will mark the debut of their new album and KCSB’s first record label.

A version of this article appeared on page 3 of the Thursday, October 31, 2013 print edition of the Daily Nexus.