The Daily Nexus
News
HalloClean Plans on Cleaning Halloween Party Damage in I.V.
October 31, 2013 at 5:00 am by Jackson Kerr

Isla Vista community members will be picking up post-Halloween debris this Saturday and Sunday from 11 a.m. to 1 p.m. though HalloClean, a concerted effort by students and local business owners looking to combat I.V.’s post-Halloween trash.

Initiated by I.V. Recreation and Park District through their Adopt-a-Block program and sponsored by Coastal Fund and the I.V. Community Relations Committee, the clean-up will begin at the Recreation and Park District at 961 Embarcadero del Mar. Last year’s HalloClean drew 227 volunteers, cleaned 1,398 blocks, totaled 332 hours of volunteer work and collected a total of 456 trash bags.

I.V. Adopt-a-Block Supervisor Adam Porté said part of the difficulty in Halloween lies in the organization of volunteers across several different areas of the town and adequately supplying all of them.

“Halloween and Deltopia are the things that mess up Isla Vista the most,” Porté said.

Porté also said he hopes to see over 80 volunteers on Saturday and over 150 on Sunday, as he expects to see a large number of willing volunteers.

“From the feedback that I’ve been getting and the marketing I’ve been doing for our event, I think that it’ll be way, way more [than expected],” Porté said.

Santa Rosa Residence Hall R.A. and second-year biology major Henry Morse, who participated in last year’s HalloClean, said he hopes this year’s event will not only negate some of the weekend damage, but encourage people to take better care of their community.

“People see you cleaning up … and even if it’s just one person who thinks about it, it makes a difference,” Morse said.

In addition to cleaning the garbage-ridden Halloween weekend streets, HalloClean includes a costume party with free food and tank tops designed by a local I.V. artist known as Bubba. But Morse said the cleaning event’s free food and festivities are hardly the best reasons to participate.

“Besides the fact that they give you free tank tops and lots of delicious food, being able to see all of the waste that’s down the streets makes you kind of angry at your community, but also gives you more passion to get out there and help out,” Morse said. 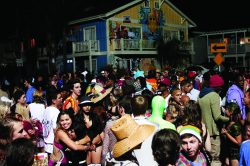 A version of this article appeared on page 1 of the Thursday, October 31, 2013 print edition of the Daily Nexus.