The Daily Nexus
News
Scholar Nassim Taleb Talks On Effects of Uncertainty
October 30, 2013 at 5:00 am by Elliott Wright 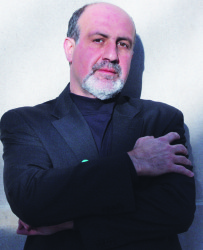 Renowned philosophical scholar Nassim Nicholas Taleb gave a lecture on the effects uncertainty has on decision-making Monday at Campbell Hall, discussing the philosophical and technical problems with probability as a measurement of economics.

The lecture touched on issues of uncertainty, disorder and randomness, with much of the discussion highlighting ideas in Taleb’s new book, Antifragile: How to Live in a World We Don’t Understand. Taleb is a former derivatives trader and has worked in mathematical finance; he now writes philosophical works analyzing ideas of uncertainty, including the role of uncertainty in economic theories of probability and metaprobability. One of his better-known works, The Black Swan: The Impact of the Highly Improbable, is often credited with predicting the global financial crisis of 2008.

Neil Kreisel, an adjunct professor at SBCC who has studied Taleb’s findings for years, said the ideas explained in Monday’s lecture help explain the financial crisis of 2008, as the formulas used by banks to manage risk are all based upon normal distributions. According to Taleb’s work, normal distributions are not always an accurate context of measurement, as the issue of uncertainty can make distributions much less predictable.

“Of course these guys didn’t know it was going to happen, because they were using tools that made them feel good,” Kreisel said. “The tools they used don’t reflect the way the world really works.”

Taleb argued for the need to stop higher education institutions, such as “Soviet-Harvard”, from sending graduates into the world with outdated ideologies, such as theories that assume normal distributions and do not necessarily take uncertainty, randomness or disorder into account.

“It’s clear to me that education disguises truth as much as it reveals it. You only find things out by questioning ideas,” Mellen said. “The thing about Harvard is that everyone is so pleased by being there that they accept authority. I love his unorthodox thoughts, even though they were obviously hard to follow. He clearly is a brilliant man.”

Taleb spent some time explaining his Black Swan theory, a metaphoric description of improbable events and the cognitive biases associated with them. Within a given sample of events, there are times when an outlier, or an exception, that brings about unpredictable results that are rationalized after their occurrence due to hindsight bias. Predicting these events is not statistically possible, Taleb said, so it is necessary that scholars and professionals measuring financial risk use “antifragile” planning to prepare for the disproportionally large-scale effects of such unpredictable occurrences.

As an instructor who recognizes the importance of Taleb’s seldom-taught findings, Kreisel said much of the contemporary literature on the theories discussed by Taleb do not even approach his less conventional arguments.

“The textbook I was using last year didn’t even mention the Black Swan,” Kreisel said. “It’s one thing to teach something that may be wrong, but it’s another thing to not even bring up the other side.”

“He’s a maverick. He is certainly anti-trend and a true independent thinker,” Charles said. “I find it refreshing that he challenges ideas and backs them up with statistics and evidence.”

A version of this article appeared on page 3 of October 30th’s print edition of the Daily Nexus.