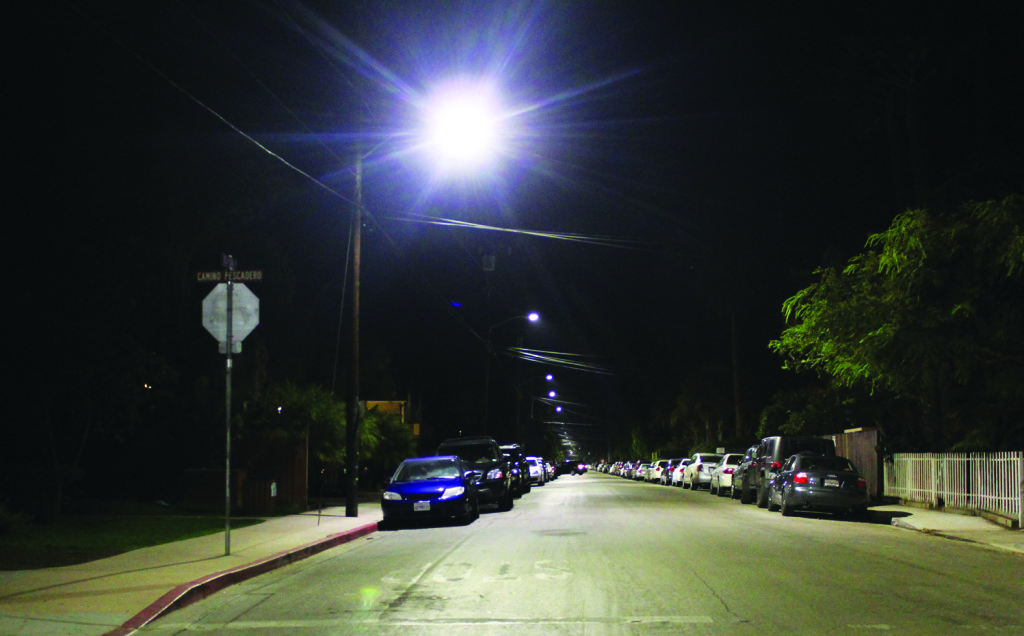 The early workings of the project came to life when a group of six A.S. students, who participated in a course called “Science for the Common Good”, decided to investigate and improve the lighting in Isla Vista, Farr said. To carry the plan into action, the students approached Farr with their idea and soon after, the local politician was helping them bring light to I.V.

Farr said her collaboration with local students is one of the ways she is trying to be “accessible” to the community. In doing this, she said it is necessary to work with students to address local issues, so as to reach a “successful conclusion” like the new lighting project.

Although the new lighting primarily arrives in light of safety concerns, LED lights are also more energy efficient and mark an upgrade from the older, dimmer lights. With brighter lights, Farr said students and other residents will be safer and generally travel easier.

“The new LED lighting is not only energy efficient and brighter — giving pedestrians, bicyclists and drivers better visibility to navigate Isla Vista in the evening — but also provides enhanced safety for the community,” Farr said.

Additionally, the new lighting was installed just in time for Halloween, as thousands are expected to fill the streets of I.V. this weekend, inviting the possibility for sparks in crime.

Sheriff Brown said providing brighter lights will help deter street crime and hopes that they will help the police keep the streets in check.

“There are studies that have shown that enhanced street lighting can reduce crime by anywhere from 7 percent to 20 percent,” Brown said. “So we’re interested to see how this lighting impacts our ability to provide patrol service.”

Students living in I.V. also have noticed the brighter lights shining just outside their doorsteps, as third-year Branden Hamby said he will now feel a little safer when biking at night.

“I used to fear hitting or getting hit by bikes or cars because the streets were so dark,” Hamby said. “With the new lights, I can fully see what’s around me, which makes me feel more comfortable.”

However, lighting project is far from over, as 70 more LED street lights are scheduled to be installed in areas east of Camino Corto, near the Loop and on various streets between DP and El Colegio, in the next six months.

A version of this article appeared on page 1 of October 30th’s print edition of the Daily Nexus.