The Daily Nexus
News
Award-Winning Journalist Sheds Light on Violence in Haiti
October 23, 2013 at 5:00 am by Carissa Quiambao

Discussing research mentioned in her book, Beyond Shock: Charting the landscape of sexual violence in post-quake Haiti, which was recently published by the UCSB Center for Black Studies Research, d’Adesky described her use of “participatory research” when examining acts of sexual violence in Haiti. This involved recruiting people from within the local community to work on recovery and research efforts at a “grassroots” level, as opposed to a broad-based NGO-level that can neglect sensitive ethnic and cultural history.

Reflecting on her findings, d’Adesky said the situation in Haiti is not just the result of the 2010 earthquake, but the product of a long history of Haitian turmoil. However, she said the country is also managing to build itself back up.

“While we have this idea that Haiti has just been a catastrophe of unending proportions, the society has built itself up,” d’Adesky said. “It’s just a remarkable place, a remarkable society.”

In Haiti, one therapy workshop that has been used to help victims of sexual violence is “Box of Grief,” in which Haitian women deposit their written stories in a box, read the stories anonymously and end sessions with “the Haitian custom of singing to turn sorrow into hope,” according to Jessica Cooper, staff psychologist at Counseling and Psychological Services. She said this practice helps survivors who may otherwise feel alone in their struggle, and she said Counseling and Psychological Services offers a similar service called “Healing after Sexual Assault.”

“The experience of sexual violence can be very isolating,” Cooper said. “In the ‘Healing after Sexual Assault’ therapy group that I co-lead, I see how connecting to and supporting other survivors can be an empowering and essential part of the long-term process of healing.”

According to Cooper, Beyond Shock communicates the power of psychological first-aid and long-term mental health services, which are necessary for all survivors of sexual violence.

“Healing is possible with support,” Cooper said. “I know this because of the journeys I’ve witnessed in healing — from identifying as a victim, to a survivor and then as an advocate in the fight for justice.”

Nadège Clitandre, an assistant professor of Global and International Studies whose theoretical framework involves the African Diaspora and humanitarian intervention in post-quake Haiti, said d’Adesky’s book spotlights the contributions of Haitian feminists. These figures, Clitandre said, helped to spread the word about gender-based issues and highlight the necessary synergy between grassroots groups and global organizations.

“What I found interesting about Beyond Shock is that it debunks these generalized assumptions and representations, in its attempt to provide a real and clear picture of sexual violence,” Clitandre said.

Such a picture actually “hones in on the lives of real people and the specific actions that actually have taken place over time,” Clitandre said.

According to d’Adesky, universities such as UCSB — which function as renowned research institutions — should continue to collect data, conduct research and correctly portray the narratives of women in Haiti and worldwide.

“There’s a tremendous demand right now for research and scholarship,” d’Adesky said. “I think your university … [is] a really right place for a lot of conversations.” 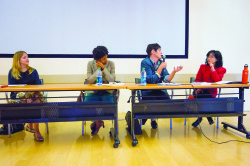 Journalist Anne-christine d’Adesky converses with event participants. d’Adesky spoke about the increase in sexual violence in Haiti yesterday in the SRB.

A version of this article appeared in the Wednesday, October 23, 2013 print edition of the Daily Nexus.