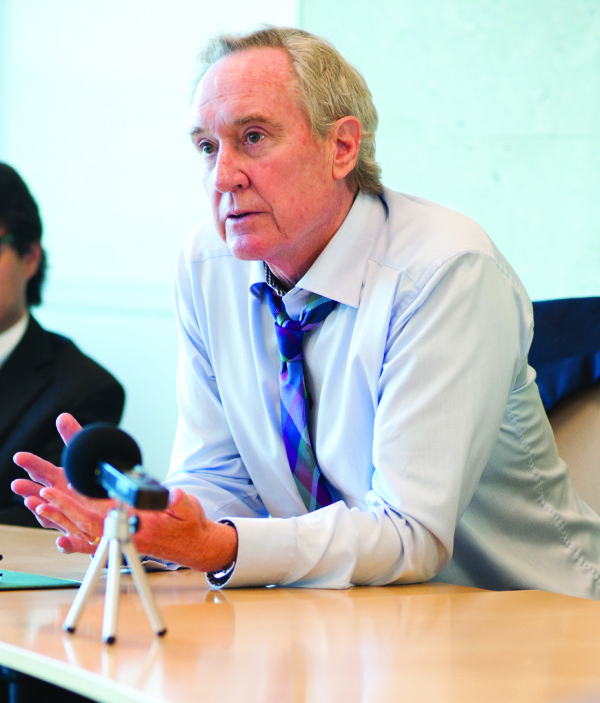 The Daily Nexus sat down with fellow Gaucho, L.A. lawyer and UC Regent George Kieffer to discuss his time at UCSB, where he advocated tenant rights in Isla Vista and played a unique role in campus-based protests of the time. Kieffer also gave an inside look at living life as a UC Regent during one of the most tumultuous times for the UC system, discussing issues such as UC online education and the controversial appointment of former Secretary of Homeland Security Janet Napolitano as the new UC president.

A 1969 graduate, Kieffer’s time at UCSB was riddled in progressive, civil unrest, as he attended the school when the University Center was taken over for weeks by a mass sit-in advocating various civil rights movements. In recalling his time here, Kieffer said he lived the typical UCSB/Isla Vista college experience: Living on Del Playa Drive his senior year, going to parties, majoring in Intellectual History and acting as Associated Students External Vice President.

Before entering the realm of campus politics, Kieffer first found himself representing other students’ interests when he became involved in an Isla Vista slumlord dilemma. While living at what was then called the “House of Lords” — an incomplete, dilapidated living complex located on El Colegio — he joined other students in suing Isla Vista Realty and the owner of the building for poor living conditions including incomplete bathrooms.

The experience catapulted him into civil service, giving him a look at how political uprisings organize and form during “the time of a crisis.”

“At a moment when everyone’s upset about something, people naturally drew together, formed leadership, picked leaders and took on the task, and leaders rose,” he said. “In other times, people are so uninterested that sometimes anybody can rise to a position of elected office … But at the time of a crisis, everybody cares and they got into it.”

Mediating Between BSU and Campus Administration

In May of 1969, the Black Student Union overtook North Hall, performing a sit-in protest and requesting that a list of demands be met. The campus group vowed to “destroy the computers in the building” and not leave the premises, according to a 1969 El Gaucho article, unless the demands be met.

Demands included the firing of former UCSB athletics coaches Jack Curtice and Art Gallon, development of a college of Black Studies, appointment of a commission to investigate racism, hiring of more Black faculty and Athletics personnel and coaches, hiring of a “Black female Educational Opportunities Program counselor”, ending of harassment for “all Black athletes who signed the original grievance list” and development of a community relations staff.

In negotiating the demands, Kieffer acted as an “intermediary” between BSU and campus administration, eventually helping bring the sit-in to an end. He said he “sympathized” with BSU goals such as “greater diversity, greater admissions, greater numbers” and as an A.S. official, he held close relations with administration.

During the UCen takeover, one student took over Kieffer’s own A.S. office — Castulo de la Rocha, a student advocating the rights of Chican@ students. Kieffer now holds business relations with de la Rocha, and he said the coincidence brings to light how generational differences can so greatly shape political interests.

Student Activism and How He Sees it

As a politically involved student, Kieffer said he “sympathized” with many of the 1969 protests at UCSB, but at the same time, did not always agree with the tactics — such as the UCen takeover. When asked if he identifies with modern-day student activism, he said simply, “sometimes and sometimes not.” While he said the activism of college students can be “a positive force sometimes,” such as when UC students successfully rallied against UC budget cuts, he said strategies like sit-ins are not necessarily effective.

“There are times when it doesn’t help, when it can actually counter,” he said. “You got to pick your spots and pick the right issues.”

Mentioning the Tea Party branch of the Republican Party and Occupy protests as two instances of political activism gone awry, Kieffer said these radical approaches can be unappealing to the general public. “I don’t think it’s worked for the Republican Party to basically stage the equivalent of a sit-in in Congress,” he said, relating this incident — which led to the government shutdown — to the mostly leftist Occupy movement that followed the 2008 national economic recession, “In both cases, the public rejected the extremes and sought a middle ground. In fact, it drove people — in both cases — more toward the middle.”

Joining the UC Board of Regents

In 2009, former California Governor Arnold Schwarzenegger selected Kieffer, a Democrat, to be the newest member of the UC Board of Regents. His term will end in March 2021.

As an attorney, Kieffer currently practices law at the Manatt, Phelps & Phillips, LLP law firm office in Los Angeles, and he was named one of the most influential California lawyers by the Los Angeles and San Francisco Daily Journals. In addition to leadership roles in various governing boards, he served on the Board of Governors of the California Community Colleges in the 1980s and later served on the Blue Ribbon Commission to Review the California Master Plan for Higher Education — the same plan which originally offered a state-funded higher education to California residents.

While calling his position as a UC Regent “fun and challenging,” Kieffer said he and other regents strive to be a part of UC campuses.

“I spend a lot of time over on the UCLA campus, just because there are activities there and it’s a cultural center,” he said. “So I and other regents are much more engaged than you may think. Just because you don’t see them, doesn’t mean they’re not engaged.”

As a Regent, Kieffer served on the Selection Committee that elected former Secretary of Homeland Security Janet Napolitano to be the new UC President. The decision has received backlash from many students, who argue that Napolitano’s lack of a professional background in education makes her ill-suited for the job. Additionally, the Department of Homeland Security deported a record number of non-criminal undocumented immigrants during Napolitano’s term, making her an especially unfavorable pick amongst many undocumented students.

However, he said Napolitano’s obstacles as the new UC President largely rest in her lack of experience in higher education.

“It’s more common that the people question the academic issue than the undocumented issue, because most people are not undocumented,” he said. “But, I’d say that the majority of people that we hear from are very optimistic about the role she can play.”

As for the current plate of issues facing the University, Kieffer said the Board of Regents is still largely concerned with keeping tuition costs down, as well as ensuring pensions and wages for faculty remain “competitive.”

“Just because tuition is frozen now, doesn’t mean we’re not going to face tuition rises in the future. So that’s still always going to be an issue,” he said. “Second, the underfunded pensions are important issues for us. I think that keeping faculty compensation competitive is a challenge for us. It’s a risk losing faculty to other private universities.”

Another issue in the UC system that has drawn much criticism and controversy, particularly from students, is the UC’s plans for online education. Kieffer addressed the issue with his own taste of skepticism, saying online education was initially “overhyped” and will need a lot of time and improvement before it becomes genuinely effective.

“It’s going to be incorporated into the University by faculty overtime. It may take awhile to do it well,” he said. “I think the faculty is trying to do it well, but it also may take the next generation of faculty who has grown up with technology, to adopt it in a way that students are comfortable with.”

On Thursday, Kieffer met with UCSB students at Mosher Alumni House, where he addressed concerns over tuition costs, Napolitano’s appointment and other controversial University issues. While he said he has “sympathy” for many of the concerned students at the event, saying one student’s testimony about being houseless “struck a cord” with him, he also noted that student views run a wide range and he does not necessarily agree with all of them.

“You’re reminded that there are a variety of views on any campus, and you’re reminded that they run from the left to the right…whether they represent the majority or not, their views have to be taken into consideration,” he said. “But just because you don’t agree, doesn’t mean you haven’t heard them.”

In regards to generally receiving UC student backlash, Kieffer, interestingly enough, related his time as a student government official in A.S. to his current experiences as a UC Regent, saying both experiences confronted him with critical opposition forces.

Beyond his current position as a UC Regent, Kieffer also touched on his interests in musical composition and songwriting, as well as his time as Isla Vista League President, when he planted 300 trees in Isla Vista alongside other students and received an award from Santa Barbara Beautiful for this work.

Reminiscing about his times on campus, as well as in the surrounding community he was so involved in, Kieffer said there is one notable aspect of Isla Vista that is very different from the days of 1969.

“What’s missing is I didn’t see the poppyfield— there used to be a monster poppyfield that was associated, in some ways, with the burgeoning drug culture of the time.”

This article appeared on page 1 in the the Monday, October 21, 2013 print edition of the Nexus.