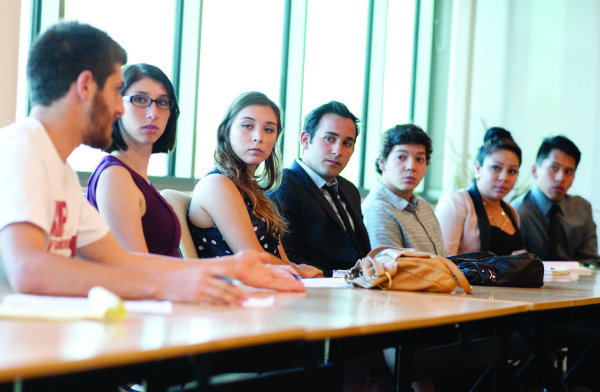 Held at the Mosher Alumni House, the first meeting ran from 3 to 3:30 p.m., with a small group of students — mostly comprised of Associated Students officers — addressing Kieffer about moving Regent meetings to Southern California, mitigating the disconnect between students and the Regents, the lack of student representation on the Board and the lack of transparency in Napolitano’s appointment. During the meeting from 3:30 to 5 p.m., student members and supporters of UCSB’s IDEAS — or Improving Dreams, Equality, Access and Success — and other campus groups gathered to address Kieffer regarding their denunciation of Napolitano, in light of Napolitano’s lack of professional academic experience and her implementation of record-breaking deportation programs, as U.S. Secretary of Homeland Security.

Kieffer, who was active in student government before graduating from UCSB in 1969, said his experiences on campus — such as mitigating a takeover between the Black Student Union and administration and forming the Isla Vista League — helped shape his involvement in civic life today.

“There was the Vietnam War, the Civil Rights Movement, in 1968 Robert Kennedy had been killed, Martin Luther King had been killed … so we had a lot of tension on campus in those days,” Kieffer said. “My involvement with the University relates back to when I was a student, when I was active in the student government.”

Opening the 3:30 p.m. discussion, Salazar criticized the new UC President’s hand in deporting undocumented immigrants through the controversial program Secure Communities, and she addressed Kieffer with these concerns, as he was on the Selection Committee that appointed Napolitano.

“We demand someone with experience in education, administration and at a bare minimum, someone who has worked with students and faculty,” Salazar said in an IDEAS list of demands. “Our university and surrounding community has suffered from Napolitano’s implementation of Secure Communities and the quota system.”

During the meeting, Abuata said Napolitano’s background does not align with the values the university is intended to support, particularly through the UC Mission Statement and California Master Plan for Higher Education, which promises an affordable public education to California residents.

“Her background is in military and militarizing our borders. Her background is not in education,” Abuata said. “You said it’s important to meet students, and that it’s a step forward. However, I know a lot of students that have been excluded from this meeting.”

Abuata mentioned the closed nature of the meeting, as many students said the meeting’s primary organizers — A.S. officials — did not publicize the location and time of the meeting, which included only roughly 10 invited students.

In addition, Wegener said the UC lacks sufficient financial support for students in need and, as a houseless student himself, he said those needs should be addressed at a statewide level.

Students like Wegener, Atuaba and Salazar also said that, after years of tuition hikes in a downtrodden economy, attending the UC has been a particularly difficult struggle for the middle and lower class, and Napolitano’s nomination and election to the UC’s helm is of no comfort to these grievances.

“We are taking a stance against the nomination of Napolitano,” Salazar said. “We demand leadership we can trust.”

The grievances set forth by Salazar and other undocumented students are, according to Kieffer, “totally natural,” given Napolitano’s role in enforcing controversial immigration policies. In fact, he said Napolitano is directly addressing these concerns, meeting with campus officials and students during her first few first weeks as UC president.

“You can’t meet with everybody, but you try. I think that this visit to all the campuses that she’s making — and making sure that she’s visiting with students, as well as the chancellor and the academic leaders — is very, very important. It’s a very important message, so I think she’s off on the right foot.”

In spite of the challenges facing Napolitano, Kieffer said he is confident in her abilities.

This article appeared on page 1 in the the Monday, October 21, 2013 print edition of the Nexus.

Wasn’t the first session 3-3:50 and the second 4-4:50? Also, why does this article focus solely on the second session, barely glossing over the first? This is terrible journalism.

I was definitely waiting to hear about other students there. But I suppose the AS President and EVPSA wouldn’t have anything interesting to say…

LOL You are using this opportunity to put down the AS Officers. IF you really care about issues and what’s going on, why dont you go talk the “AS President’ and the “EVPSA” and try to work together to make changes happen.

FYI: from 3 to 3:30 p.m., with a small group of students — mostly comprised of Associated Students officers — addressing Kieffer about moving Regent meetings to Southern California, mitigating the disconnect between students and the Regents, the lack of student representation on the Board and the lack of transparency in Napolitano’s appointment.