During Wednesday night’s Associated Student’s Senate meeting, UC Regent and UCSB alumnus George Kieffer made an appearance with Chancellor Yang to speak words of encouragement to the senators.

During his time as an undergraduate student at UCSB, Kieffer sat on the A.S. Legislative Council — the precursor to the Senate. He said his experience on the council prompted him to come to Wednesday’s meeting as an observer.

“I came mostly just to watch because I did this when I was here,” Kieffer said. “I sort of appreciate what you’re doing — I kind of identify with it because it was a big part of my life while I was here.”

During the meeting, Senator Derek Wakefield posed a question, which called to memory last year’s divestment debacle, asking for Keiffer’s opinion on addressing a situation where two opposing groups feel so strongly about their respective sides that any vote will result in hurting one group. In response, Keiffer said he advises the senators to take the future into account, when trying to figure out the right course of action.

“Figuring out the right thing is a hard thing. But I think doing the right thing should be easy,” Keiffer said. “Take as much consideration of the future as you do of the present. In other words, look at everything together — not just what’s happening today and how it got to today, or how it’s going to look today.”

Later in the meeting, each of the five executive officers presented reports from their offices. A.S. President Jonathan Abboud discussed financial matters regarding potential renovations to the University Center, the total cost of which he said would amount to approximately $25 million. Abboud said he has been working on restructuring the Association to increase efficiency and transparency, proposing changes to the A.S. Legal Code as one means of doing this.

“Beyond the major reorganization I proposed, I have been doing extensive research on every single line of the legal code to see what is incorrect and what needs to be changed, and what should be updated,” Abboud said.

External Vice President of Local Affairs Alex Moore addressed safety matters regarding the upcoming Halloween festivities for which Isla Vista has become known. Moore proposes investing in fencing along the whole of the Del Playa cliff, in order to prevent injuries. In light of one individual already suffering a cliff-related injury this year, Moore said action must be taken to ensure “we’re not known as the cliff-fall capital of the UCs.”

He said he would like to see some funding for the fencing come from Santa Barbara County so student fees alone would not bear the burden of the cost.

Moore also said, in light of Lt. Rob Plastino being new to Isla Vista Foot Patrol, he would like to open communication between Plastino and the student body as soon as possible.

Other projects discussed during Wednesday night’s meeting included providing alternative Halloween activities for Isla Vista children, applications for the Student of Color conference, the first ever campus farmer’s market to come next week, and plans to pressure local businesses to become more sustainable. 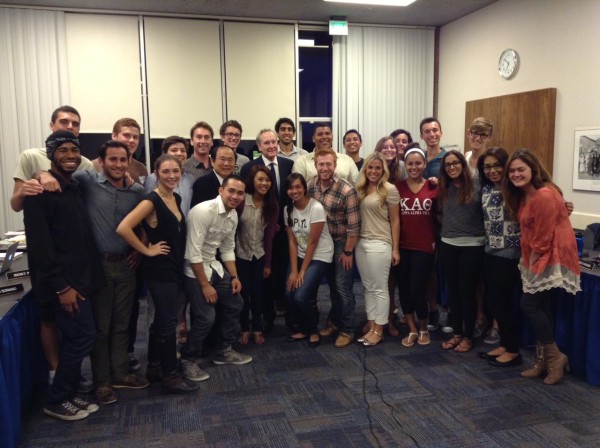