World-renowned activist and scholar Angela Davis visited the UCSB campus last Thursday, speaking to students and attending a screening of a film that chronicles her time as a political prisoner, as well as her involvement in many social and political movements of the 1960s and 1970s.

The documentary, “Free Angela and All Political Prisoners” was screened at a sold-out showing in Pollock Theater, and was followed by a Q&A session was moderated by associate professor of Black Studies, Gaye Theresa Johnson. The event was hosted by Sol Sisters Rising, an organization that supports films discussing the lives of women of color and currently holds a catalog and searchable database for over 2,000 films, according to a press release.

Directed by Shola Lynch and co-produced by entertainment icons like Will Smith and Jay-Z, “Free Angela and All Political Prisoners” follows Davis’ life as a young civil rights activist, highlighting her work in social activism central to the mid-and-later 20th Century. She has been affiliated with the Black Panthers and campaigned twice as the vice-presidential candidate for the Communist Party, with her early engagement in Communist thought leading to her being terminated from UCLA professorship in 1969. Although Davis was reinstated to her position when a judge ruled she could not be fired for her political beliefs, she was removed again in 1970 for possessing “inflammatory” language in some of her speeches.

“Free Angela” focuses on Davis’ implication in the attempted kidnapping and murder of Superior Court Judge Harold Haley, which took place in 1970 at the Marin County courthouse in Northern California and pushed her onto the FBI’s 10 Most Wanted list. Although she was acquitted of all charges, Davis’ experience of imprisonment stirred her activism in disputing the American prison industrial complex.

At the event, Davis said the documentary shares details of her past to educate current generations about the power of binding diverse social justice efforts together, according to a press release.

“It’s the story about a victory that was achieved against all possible odds,” Davis said in a press release. “This was the reason I thought it might be important to record that story — not so much because it focuses on me as individual, but rather it’s the story that, in the end, was victorious as a result of people coming together across all kinds of dividing lines — racial boundaries, national boundaries, ethnic, cultural. People all over the world joined the campaign to free me, and in the end, we won.” 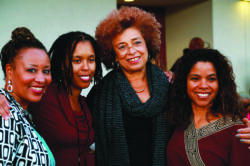