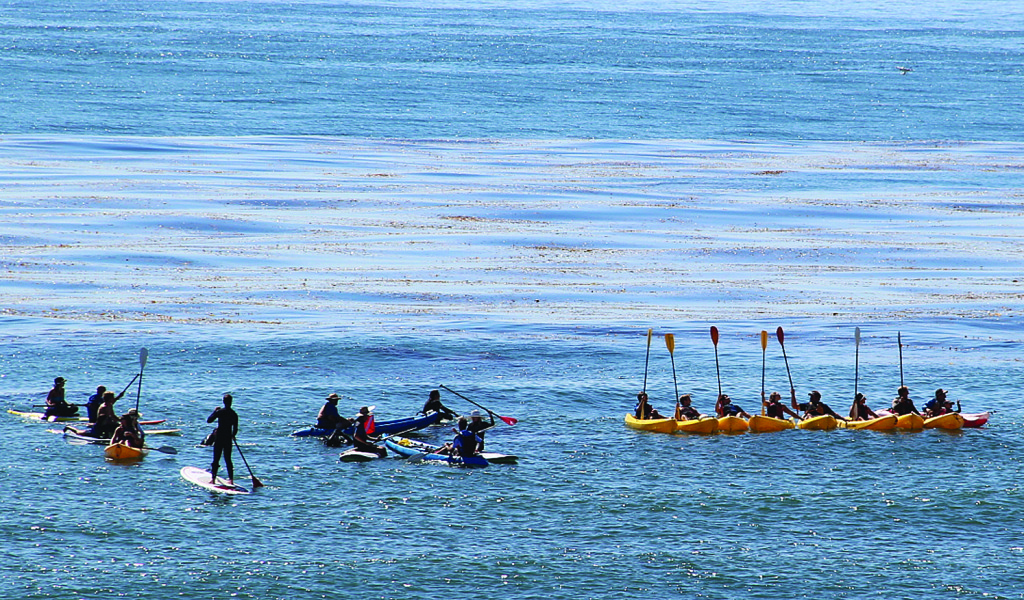 Featuring guest speakers and a grand ‘paddle out,’ the event was hosted at Devereux Beach in Isla Vista and also included a raffle, Woodstock’s Pizza catering and an array of items provided by the Santa Barbara Adventure Company, Channel Islands Outfitters, Teva and REI.

A non-profit organization aimed at protecting the local channel and watersheds, Santa Barbara Channelkeeper organized the event to educate students and Isla Vista residents about living near a Marine Protected Area. In Isla Vista, this specially-guarded area extends from Campus Point to Coal Oil Point.

According to Michael Cohen, owner of Santa Barbara Adventure Company, the existence of an MPA in the community may actually benefit residents more than fishers, thanks to the significant tourism a thriving marine ecosystem provides. He said he hopes students are aware of the area’s historically high fishing rates due to commercial fishing and how protecting the area will likely increase marine life sightings.

“Marine-protected areas are going to increase marine life in those regions, and that, as a tour operator, helps us up and down the coast,” Cohen said. “People get their breath absolutely taken away when they see dolphins swimming through kelp beds in a pristine marine environment.”

Second-year student Jamie Heist, also a student staff member of UCSB’s Adventure Programs, said he agreed that having a nearby MPA benefits students and campus communities.

“When we go out there and take groups of people, we usually want to see something,” Heist said. “We want to see animals, and if it’s not protected, then we get a bunch of fisherman out here. Plus, that adds the danger factor because there are hooks on the beach and there’s garbage.”

According to Pitterle, the MPA could be useful to the university beyond merely its recreational and economic benefits.

“As a student, there’s a real enormous scientific potential in studying these marine reserves and how they work,” Pitterle said. “I think for the university, having it right off their shorelines is going to be important for educational reasons too.”

Given the success of Saturday’s event, Pitterle said Santa Barbara Channelkeeper might consider hosting more events similar to this one, particularly for educating new classes of first-year students.

A version of this article appeared on page 3 of October 7, 2013’s print edition of The Daily Nexus.