The Daily Nexus
Sports
Sacramento Kings Build Momentum at UCSB
October 2, 2013 at 3:57 am by Paul-Michael Ochoa and Kristen Henneman 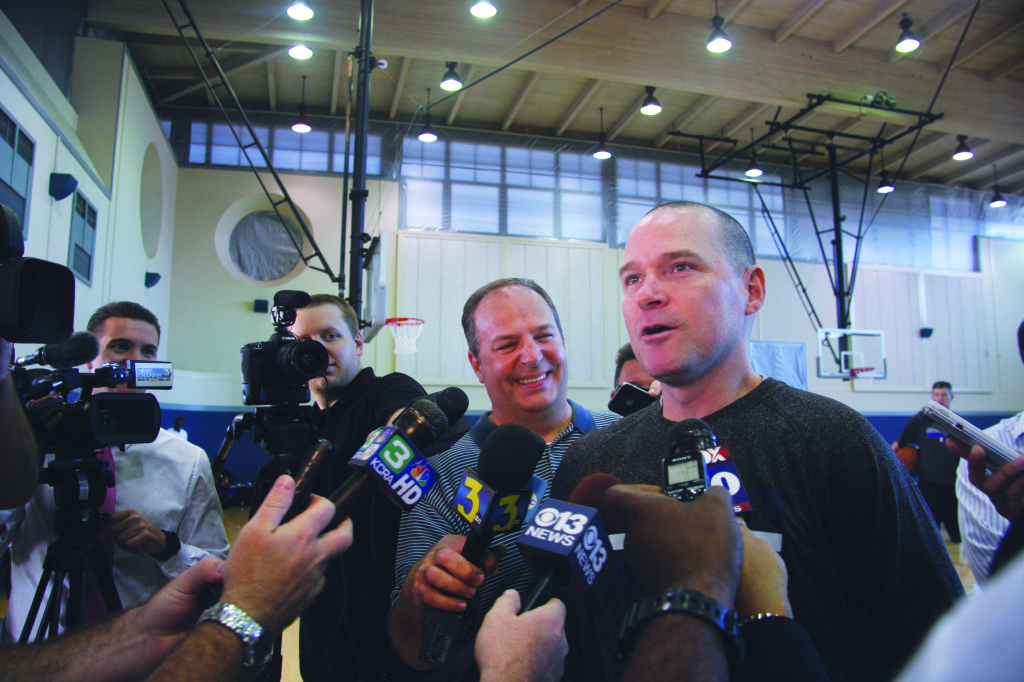 The Sacramento Kings started their 2013-2014 season at UCSB yesterday. In Santa Barbara until Oct. 6 for training camp, Head Coah Michael Malone wanted to avoid all distractions they might have in Sacramento.

If you’ve noticed that the Pavilion Gym at the Rec Cen is closed to students for the week and taken a look inside, you may have seen some rather large and familiar looking individuals inside the gym.

The Sacramento Kings opened training camp yesterday at UCSB, kicking off the 2013-2014 NBA season a ways from home.

The decision to bring the Kings to Santa Barbara involved getting away from Sacramento for some bonding experience at a time when the Kings are undergoing a fresh start as a franchise.

“We wanted to get out of Sacramento and have an opportunity to get together as a team away from everything,” Head Coach Michael Malone said. “We have a new staff, a new front office, two new rookies and three new free agents. Hopefully this is an opportunity for us to bond, unite and build the chemistry and trust you need. This is a great facility at UCSB, a great city and I think all of our guys are pretty happy to be here.”

According to Director of Public Relations Chris Clark , the location for the Kings training camp was between Santa Barbara and one other location. However, when Kings Staff checked the site in August, they decided UCSB was the perfect place.

“You’re always looking for somewhere that can relax your guys,” Clark said. “It’s a long season, 82 games. Santa Barbara gives us the chance to come to a beautiful locale, good weather and good facilities. When you combine all those things, it was an easy decision.”

Sacramento will be conducting training camp at UCSB until Sunday, Oct. 6 at which point they will travel to face Golden State in their first preseason game of the season Oct. 7.

Golden State may be a familiar opponent to many members of the Kings, as Malone was an assistant with the Warriors during last season’s impressive campaign.

“Obviously I was a part of [the Warriors] the last two years,” Malone said. “We wish them well, but we’re doing our own thing. This is about the Sacramento Kings. It’s just a new day for Sacramento and the fact that a lot of people came up from the bay is just a coincidence.”

After undergoing much turmoil in the form of ownership issues and a possible relocation to Seattle in previous seasons, the Kings can finally get away from all the off-court drama associated with the franchise and focus back on the court.

“Not having you guys have to ask me if we’re going to be staying this year is definitely good and it’s great for the fans too,” forward Jason Thompson said. “On the court, the mindset has changed too. We’re going to be a defensive team that can get out and score. We’ll be a fun team to watch.”

With a new era under Malone comes a new style of play, which looks to dramatically improve on the defensive end for a team that ranked last in points allowed per game last season by a large margin.

“I want to defend and from the defense, everything else will come,” Malone said. “We still want to run, but we want to run with discipline. None of that will happen if we don’t commit to defending and rebounding at a high level.”

On the offensive end, the new regime wants a more unselfish style of play, as evidenced by the team’s move to send Tyreke Evans to New Orleans in exchange for point guard Greivis Vasquez, who ranked third in the NBA last season with 9.0 assists per game.

Combined with fellow point guard Isaiah Thomas, the Kings look set at a position that was so often reliant on the shoot-first Evans.

“What I loved today was that [we had] two highly competitive players fighting for a starting job pushing each other,” Malone said. “We have two very talented point guards that will hopefully lead us to a lot of wins this year.”

Headlining the Kings is center DeMarcus Cousins, who was recently signed to a four-year $62 million deal that clearly shows the team’s trust in Cousins to become the franchise player that will once again lead them to the postseason.

Now that a new season has arrived for a franchise with a much changed makeup, the Kings will try and improve upon last season’s 28-54 record and possibly contend for a playoff spot in the ultra-competitive Western Conference.

“Obviously the goal is to make the playoffs,” Guard Jimmer Fredette said. “We want to move forward as an organization and as a team and get better each and every day.”

Santa Barbara certainly seems like the perfect place for a franchise searching for a fresh start and if the vibe from the Kings training camp is any indication, a little bit of Santa Barbara may be just what the Kings needed to start off the season on a high note.

A version of this article appeared on pages 1 and 3 of October 2, 2013’s print edition of The Daily Nexus.

Photo by Kristen Henneman of The Daily Nexus.

It’s about realizing your dream and living life the funnier method.
It’s Really A great way of letting loose, not forgetting a great stress buster.
In essence, it is filling enthusiasts with glee.