The Daily Nexus
Outside Opinions
Modifying the Stigma Surrounding GMOs
September 19, 2013 at 5:15 am by Jay Grafft

“All Natural!” “Green!” “Certified Organic!” If you’re paying any attention to what you’re buying and eating, you’ll know that these are just a few of the exclamations that are thrown on to the labels of our food items nowadays. “Evil” corporations like Monsanto want to shove the radioactive sludge they call “edible” down our throats while making sure to rob every last dollar from their consumers. No one in their right mind would intentionally champion something as unholy as genetically modified organisms … except for this guy.

Now, to be clear, I am not defending business practices (or any practices, for that matter) that harm the environment. In fact, I consider myself a bit of an environmentalist; I actively take steps to reduce the amount of water, energy and other resources I use, therefore cutting down amount of waste I produce. But what if I were to tell you that GMOs aren’t actually as bad for the environment and your body as you have been led to believe? And that, in the end, these unnatural plants are possibly the very thing that could lead to our continued survival as a species on this planet?

First, let’s back up … way up. The fact is, we have been changing the food that we eat for the past 10,000 years. Since the first hunter-gatherers decided to settle down and start growing their own plants and raising their own animals to eat, we have been, both intentionally and accidently, changing the genetic structure of these organisms. It takes a long time, but after a few generations of breeding, these changes become clear.

There are dozens of examples of this: Wild bananas are small, green and full of seeds, but through thousands of years of domestication, we have turned these bananas into something never before found in nature. The bananas you buy at the store are, in fact, “man-made.” Yellow, delicious and perfect for human consumption, meticulous centuries of experimentation with different techniques and species of plants have turned this originally unappetizing fruit into something much more appetizing. GMOs are simply more efficient because they reduce the time it takes to craft the perfect food from hundreds of years into just a few. Instead of going through countless of stages of trial and error, genetic modification allows us to directly create the thing that we want. The only reason people don’t like it is because it is all done in a laboratory setting … it seems unnatural. 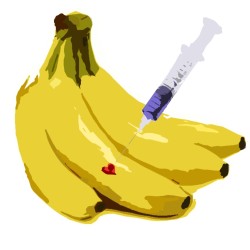 But “natural” does not inherently mean better. Hemlock is found in nature, but you sure as hell don’t want to eat it. I was born “naturally” shortsighted. Every morning that I put my contact lenses in my eyes, I am doing something “unnatural.” Is that bad? Okay, you might say that is different, as I am not really ingesting my contacts. But we ingest unnatural things all the time, namely, of course, modern medicines. Obviously Pepto-Bismol is not completely made up of ingredients that grow on trees, but when you’re having agonizing diarrhea, I don’t really think you’re going to care about how “natural” the stuff is.

Of course, just like any of our modern medicines, I believe that GMOs should be stringently tested, labeled and held to very high standards. We need to be sure the food and drinks we consume, both genetically modified and otherwise, are safe and healthy and are not going to have deleterious effects on our bodies several years down the road. After undergoing the proper tests, if something is shown to be okay to consume, then I have absolutely no problem eating it.

So what can GMOs offer us? Well, once you begin to change the DNA of an organism, the options become nearly limitless. We can craft heartier plants that can be cultivated in climates that they originally could not grow in, be it hot, dry deserts or frozen tundra wastelands. We could make crops that use less water and nutrients from the soil, leading to a less severe impact on the environment. We could create a plant that has twice the amount of vitamins and minerals as whatever would be found in nature, helping fight malnutrition around the globe. As the human population continues to increase exponentially in the 21st century, these are all factors that we are going to have to seriously consider. If we write off genetic modification, we will undoubtedly come to face resource depletion, a certain death for the only planet we call “home.”

In the end, if you still do not like the idea of GMOs, then don’t eat them. I fully encourage being skeptical and cautious, especially with something as relatively new as the genetic modification of plants in a lab. However, if studies show that something does not have a harmful effect on one’s health, then what would be the reason for fighting it? Other than the initial gut reaction, it should become clear that, as long as they are made responsibly, the benefits of GMOs vastly outweigh any negatives.

Jay Grafft knows that no one lives forever, but he figures that with advances in modern science, it’s not crazy to think he could live to be 245, maybe 300.

A version of this article appeared in the Thursday, September 19, 2013 print edition of the Daily Nexus.