The Daily Nexus
Opinion
Politically Incorrect: Time for a Change
May 30, 2013 at 5:00 am by Mark Strong

I know that’s not the most chipper salutation. It’s not exactly a “Good morning!” or a “Happy Thursday!”, but as the school year (and this column) winds down to a close, I’ve been contemplating the incommensurability of death and the inevitable march to oblivion that we like to call “life.” Most of all, I’ve been thinking about my readers.

There’s not much I could say about you with absolute certainty. Wherever you happen to be reading this — over waffles and toast in Ortega, on a computer screen in your bedroom, on the steps outside Davidson Library — chances are that I’m probably not looking at you right now. I don’t know the color of your hair or your eyes, your height, weight, complexion or build. I don’t even know your first or last name. However, what I do know, beyond any shred of a doubt, is the fact that you’re going to die.

It’s a sobering realization when you really come to terms with it; maybe you already have. You might be one of the cozy few who walk through the world, one day at a time, with a healthy appreciation for life’s fleeting flare. You might be among those who are chronically aware of it, checking stove burners and locking windows every night before bed. Most likely, though, you belong to the majority of young adults (myself included) who view death as an inconsequential speck on their horizon.

I’m talking about the crowds that flood DP every Friday and Saturday night, dressed in heels and tank tops and miniskirts, tapping kegs and sipping jungle juice and waltzing home with attractive strangers. I’m talking about the guys holed up in their dorm rooms, rolling joints and taking bong rips with a towel tucked under the door. There’s nothing wrong with this kind of behavior, but it demonstrates that you’re probably not taking your life too seriously.

Now, the last thing I want to do is to come off sounding like your grandfather. I’ve had my fair share of sloppy nights these past two years, and I’d be lying if I said I didn’t enjoy them immensely. But the more I see of Isla Vista — the more thumping frat parties, afternoon keggers and front-lawn Snappa tournaments — the more I start to think we’re doing ourselves a disservice.

As 18- to 22-year-olds, we’re undeniably in our “prime.” We are as physically and mentally fit as we’ll ever be, and we have yet to be ensnared by the “real world’s” 9-to-5 grind. According to the popular paradigm, this means we should spend our time smoking, drinking and fucking as much and as frequently as possible. Youth is fleeting and we should take advantage of it while we have it. You only live once, right?

Right … but that’s a little like taking the football and running it into the other team’s end zone. It’s backwards logic that confuses consumption for productivity. As the fittest and brightest of our generation, we have the means and the resources to make substantial, positive changes to the world around us. We have opportunities in college that will all but evaporate 10 or 20 years down the line. We have the freedom to “test the waters” and explore new fields of intellectual and creative material, and the consequences of failure are currently as minimal as they’ll ever be.

Our party culture squanders all of that. What I see on an average night in I.V. is a celebration of wasted potential — a mindless embrace of emptiness and personal stagnation. We’re going nowhere, and we’re proud of it. What’s more is that we use phrases like “YOLO” to marginalize and excuse our shortcomings.

It’s a lame excuse. YOLO is just carpe diem minus the accountability. It views life like it’s a stolen Porsche with lifted plates and a juiced-up engine — just something to speed down the highway and crash into a ditch.

There’s no ownership in that philosophy. There’s no accountability for yourself or those around you. Most importantly, there’s no recognition of death. If you were truly living each day like it was your last, would you really spend it doing Jägerbombs on your balcony?

I’d like to believe we’re deeper than that. Whatever your spiritual or religious beliefs may be, there’s no denying that once we leave this world, we’re gone for good. In the overarching scheme of time, there’s very little we can do that will actually matter. Our books and records will disintegrate; even our statues and monuments will crumble. The most we can hope for is to leave this world a better place than we found it. We need to set an example for the generations that will follow.

So the next time you find yourself meandering over to DP, ask yourself, “Is this how I really want to spend my time?” Challenge yourself to think, act and live to your fullest potential. Say what you mean and do what you say. After all, if these four years in college really turn out to be the “best of your life,” what’s the point of all the rest?

Mark Strong is paving the road today for a smoother journey tomorrow. 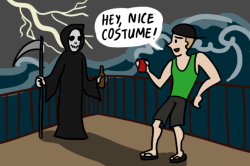