The Daily Nexus
News
Bike Safety Week Holds Workshop, Surveys on Campus Bicycle Paths
May 29, 2013 at 5:00 am by Tiana Miller-Leonard 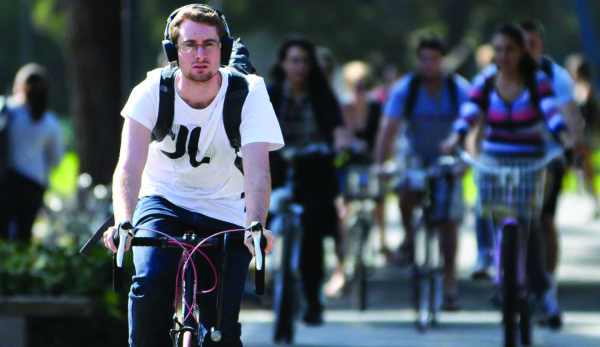 Students make the daily bike commute to campus. A.S. Bike Committee will be holding bicycle safety-related events throughout the week.

The A.S. Bike Committee is hosting Bike Safety Week from now until Friday, encouraging students to practice caution while riding through the sometimes-risky bike paths on campus.

A.S. Bike Committee will be tabling at the Arbor all week as well as passing out bike lights and surveys for students to improve their knowledge of bike safety. On Friday, the committee will hold a bike fix-it workshop with a mechanic from the A.S. Bike Shop, allowing local cyclists to learn repair skills and other useful biking knowledge.

A.S. Bike Committee works all year to improve the biking climate of UCSB, with current plans to launch renovations to the bike racks at the Music Building, Humanities and Social Sciences Building and the University Center, in addition to a long-term plan to implement a new roundabout path near the tunnel located by the Recreation Center.

According to A.S. Bike Committee Vice Chair Mac Kennedy, maintaining the quality of the bike culture at UCSB — which is ranked second only to Stanford as the most ‘bike-friendly’ university nationwide — is a top priority for students.

“Bike culture is, in my opinion, one of the integral parts of the UCSB student experience,” Kennedy said. “Currently, UCSB is ranked as the second-most bike-friendly university … and we think we can be the best.”

Bike Committee Chair Emily Littleworth said although she does not believe the biking climate at UCSB is particularly dangerous, it can be daunting for incoming students.

“If you haven’t biked at UCSB, and you come here for the first time, and you see all the students, it can be overwhelming,” Littleworth said. “I think it takes some practice learning how to ride on the bike paths, learning regular traffic laws that people should abide to.”

Littleworth said Bike Committee aims to reduce the danger by both improving cycling infrastructure and educating the community on safe biking tips.

“A.S. Bike Committee is basically devoted to improving the bicycle system on campus at UCSB,” Littleworth said. “We do things ranging from basic improvements on bike paths, to putting in new racks, to putting in bike pumps around campus.”

Kennedy said he hopes to reach out to a larger number of students in the future, as a means of expanding and strengthening the committee.

“One thing I’m working on for next year is trying to get more general members involved,” Kennedy said. “Because I think we need to democratize the whole process and expand the committee.”

A version of this article appeared on page 4 of the May 29th, 2013’s print edition of the Nexus