After officially adjourning the final meeting of the 2012-13 Associated Students Senate, senators and Executive Officers for the 2013-14 school year were sworn into their respective offices on Wednesday night.

Senators commenced their term at around midnight, after an initial meeting in which departing executive officers delivered their final reports. Their meeting lasted approximately two-and-a-half hours, with the longest discussion surrounding a debate over whether to approve the appointment of Aidan Brorsen to the position of chair of A.S. Committee on Committees.

Before officially swearing in the new senators, however, outgoing senators offered reflections on their terms and gave advice to the incoming team.

Off-campus Senator Taryn Sanders stressed the importance of building relationships with fellow student policymakers outside of the Senate meetings, so as to maintain a healthy work environment. Sanders said fostering such bonds and friendships within A.S. can potentially help members during conflicts or issues.

“Have parties together. Socialize together. Hang out together outside of Senate,” Sanders said. “Make some personal connections so that you aren’t yelling at someone in Senate that you hate because you don’t even know them.”

According to Off-campus Senator Navkiran Kaur, the incoming Senate should strive to go beyond requirements detailed by the legal code and reach out to groups or communities who may not already have a presence on the Senate.

Sommers said she was unsure of why the opposing candidate Zach Goulhiane was not chosen during public forum and she questioned the basis behind Brorsen’s appointment.

Newly sworn-in A.S. President Jonathan Abboud said Brorsen’s appointment over Goulhiane’s was due to the other candidate’s potential for placement in other A.S. positions.

“Zach is being highly considered, basically selected, for other positions within the association,” Abboud said.

After much deliberation, the decision to confirm the appointment was tabled for one week, providing senators with more time to obtain information regarding each of the candidates. 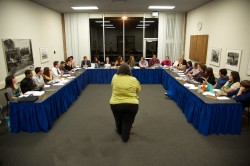