The Daily Nexus
News
Substance Abuse: Perceptions and Reality
May 22, 2013 at 5:00 am by Carissa Quiambao and Rilla Peng

76 percent of UCSB students have consumed alcohol within the past 30 days, and 20 percent of students have taken a prescription drug not prescribed to them, according to the National College Health Assessment 2011 data. While substance abuse issues face college students nationwide, many health professionals are claiming UCSB students face concerning academic and social pressures that have led to drug and alcohol use statistics that largely exceed that of the national average.

Health professionals have said that students with mental health issues commonly turn to substance abuse, rather than utilizing resources such as counseling or psychological services.

According to Jackie Kurta, director of the UCSB Alcohol and Drug Program, students misuse prescription drugs for experimental and recreational opportunities, as well as to gain relief from stress and anxiety.

“Sometimes, people have the misconception that because something is a prescription medication instead of a street drug, it’s safer,” Kurta said.

According to 2011 statistics collected by the National College Health Assessment, the use of prescription drugs without a prescription stands at 26.4 percent at UCSB, while the national average for this same number is just 15.5 percent.

Active Minds Communications Director Carly Chianese said students often turn to stimulants like Adderall, Vyvanse, Dexedrine and other amphetamines for an extra boost in their studying.

At UCSB, the use of stimulants without a prescription is even more prevalent than at other universities nationwide, with 20 percent of students admitting to using such drugs in the past 12 months versus the nine percent national average, according to NCHA 2011 data.

However, Life of the Party member Jason Vego, the marketing and outreach intern for the organization, said the use of stimulants like Adderall is actually a less dangerous form of substance abuse than other forms of alcohol and drug use at UCSB.

Vego did mention the common use of stimulants that are mistaken for Adderall, such as Ritalin, as being potentially harmful, as students are unaware the effects of each given drug. He also said anxiety and irregular heart rate are some of the effects of using these stimulants, and added that UCSB students oftentimes suffer greater physical harm from other forms of abuse — namely the unsafe consumption of alcohol and practice of mixing prescription drugs with alcohol.

Drinking alcohol at a rapid pace or consuming it with little food are common forms of such “unsafe” drinking, according to Vego, who said these habits have some of the most dangerous effects, such as blacking out.

Vego pointed to social and academic pressures as potentially causing many students to resort to such abuse, as a form of self-medication.

Furthermore, Gauchos for Recovery Peer Intern Amy Katz said students also turn to such drug and alcohol use because there is a lack of support for those in recovery, which she suggested is a result of the social culture of Isla Vista.

“A big problem is definitely the environment that students are in. It’s really difficult,” Katz said. “It’s easier to stay in recovery if you’re working with a program like Alcoholics Anonymous. But if you’re not, most of the students who are simply not drinking are not staying in recovery. They keep going out and drinking.” 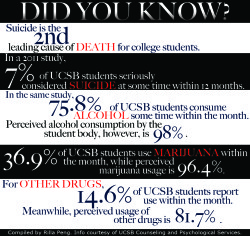 A version of this article appeared on page 1 of the May 22, 2013’s print edition of the Nexus