The Daily Nexus
News
Isla Vista Pop-Up Restaurant To Hold Final Brunch
May 21, 2013 at 5:00 am by Jennifer Chang 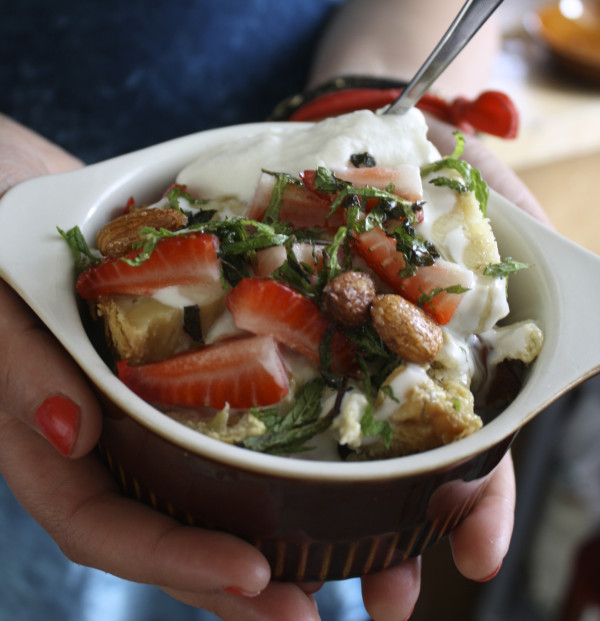 Every week, Karla Subero can be found in the kitchen of her one-bedroom Isla Vista apartment cooking Sunday morning brunch. But rather than the usual eggs, bacon and orange juice, Subero serves up gourmet dishes like quiche Florentine or Peking duck for her pop-up brunch eatery Chateau Whatever.

Chateau Whatever was created after Subero, a fourth-year anthropology major, was inspired by the pop-up restaurants of New York and San Francisco, where the small eateries are usually managed out of private homes or food trucks. While pop-up dining has existed prior to the 21st century, it has most grown in popularity since the early 2000s in Britain and Australia.

Subero admits to being an avid foodie, and said she came up with the idea of running her own pop-up after looking up the history and popularity of the trend online.

“Being the big food dork that I am, I had done a lot of internet research … I just thought it was so cool.”

While Subero has other experience in the food industry, catering with a friend before first launching Chateau Whatever, she said she found working professionally much less fulfilling, as she held less creative control over deciding what dishes to create and serve. In March 2011, she hosted her first pop-up event, serving up brunch for a few friends at her apartment. Over time, Subero’s small venture grew and the number of guests attending the events went from 15 people attending the first event to 30 people arriving at the second.

Before she knew it, Subero’s pet project became a full-time job and Chateau Whatever now serves 50 to 70 hungry Isla Vista patrons on any given weekend.

Originally, the restaurant was unnamed and went by the informal title of “HomeCookedHood” on its Facebook page. Later, it was named Chateau Whatever due to its role as an eatery with a laid-back atmosphere and creative yet affordable dishes.

The cuisine of Chateau Whatever does not stick to the guidelines of a typical brunch, according to Subero, who said the restaurant’s menu offers familiar, home-style foods with a gourmet spin. Past menus have included options such as macaroni and cheese quiche, black forest French toast, pulled-pork brioche sandwiches with blackberry barbecue sauce and Indian curry chicken and waffles.

“I don’t like to neglect ingredients just because they don’t fit within a certain type of cuisine,” Subero said. “My cooking style is mostly traditional, but I like to twist it with something that might not normally be there.”

From “Indian Bazaar” and “Oh My Godfather” to “A Stoner’s Brunch” and “Cowboys & Campfires,” each Chateau Whatever brunch is given a unique theme. According to Catherine LaGaly, a fourth-year psychology major who works with Subero, the small eatery stresses the usage of ingredients from local farmers’ markets and offers a wide variety of vegetarian options.

“I would say we do 80 percent of the shopping at the farmers’ markets, three times a week,” LaGaly said. “Then we fill in basic needs from Trader Joe’s.”

At Chateau Whatever, LaGaly does not cook or build the menu but helps bounce off ideas with Subero, while also managing and promoting each weekly brunch on Facebook. LaGaly said she fell into Subero’s world of underground dining by chance, discovering the eatery while completing a photo assignment for the local publication Word Magazine.

“Word Magazine sent me to photograph one of the events for a story,” LaGaly said. “I thought I’d go for five minutes, and I ended up staying four hours, and Karla and I have been fast friends ever since.”

According to LaGaly, Chateau Whatever recently expanded its range of events to now include pre-paid, sit-down dinners, rather than the usual dining options. The restaurant is now also adopting cultural themes such as “Spanish Pirate Feast” and “Moulin Rouge: A French Fete.”

“We did a Cuban dinner called Havana Nights on this gorgeous ocean-front house on Del Playa, and we did a 1920’s speakeasy theme and had the UCSB Jazz Band play,” LaGaly said. “That’s why I like the dinners — they’re more of an event. People will come in full costume.”

This weekend marks Chateau Whatever’s last brunch, as Subero said she is graduating in June and has plans to relocate to Paris to continue her culinary aspirations.

“I bought a one-way ticket and I’m going to cook,” Subero said. “I will have a restaurant in five years, but I want to explore and taste the world first.”

There is currently no one set to take over the project, but Subero said she has been asking individuals who are interested to contact her by June 15.

While LaGaly said she hopes someone will be able to take on the tradition and continue Subero’s legacy, she said the brunches will not feel the same without Subero.

“I think it’ll leave a pretty big void in Isla Vista,” LaGaly said. “But I don’t think anyone could do it quite like she does.”

Chateau Whatever, formerly known as HomeCookedHood, is a pop-up restaurant in Karla Subero’s apartment
in Isla Vista. Several locals flock to her apartment-turned-restaurant every weekend for its themed cuisine.

A version of this article appeared on page 5 of May 21st’s print edition of the Daily Nexus.