The UCSB baseball team is in the midst of its busiest week of the season but that does not seem to be slowing the team down any. The Gauchos have now won six of their last seven games with a victory over Loyola Marymount Wednesday afternoon with a score of 11-3.

The Gauchos just finished their fifth game in six days after a weekend series with Cal State Northridge and a single game with Washington State on Monday, going 4-1 over that span.

With the win against Loyola Marymount, UCSB improves to 29-21 on the year and remains at 12-9 in the Big West due to the nonconference matchup. LMU falls now to 22-26 on the year and 10-11 in the West Coast Conference.

With the busy week, solid starting pitching is important to keep the bullpen rested, and the Gauchos got just that on Wednesday from freshman pitcher Justin Jacome. Jacome threw six and one-third solid innings, allowing seven hits on just one earned run.

“Jacome came out for his first appearance since he sprained his ankle pretty bad and didn’t fall behind until the last batter he faced,” senior third baseman Marc Venning said. “He really pounded the strike zone and we got him an early lead. The plan was to let them get themselves out and let our defense work behind him and that’s exactly what he did.”

The Gaucho offense that walked off with a bunt on Monday stayed white hot as the team put up 11 runs on the afternoon.

The outburst began in the second inning when Monday’s hero in sophomore center fielder Cameron Newell led off the inning with a single. Newell stole second and was then doubled home by senior third baseman Marc Venning to plate the first run in the three-run inning.

“I’m not totally healed yet but I wanted to come back and play my last 14 games and finish out my career and help the team out how I can,” Venning said. “We really swung the bats well today and they made a few mistakes defensively but we capitalized on those mistakes and made them pay.”

Later in the inning, with runners on first and third, junior catcher Jackson Morrow laid down a bunt that was misplayed by LMU’s senior pitcher Matt Florer, which led to Morrow’s first of four RBI on the day. Junior shortstop Brandon Trinkwon grounded into a double play, but the third run would score on the play.

In the top of the third, the Gauchos would strike for four more runs. With the bases loaded, Morrow singled to score the first two runs of the inning. Morrow’s base hit was followed by an RBI single by junior left fielder Joey Epperson and another misplayed ball off Trinkwon’s bat led to a four-run inning.

Up 7-0 already, the Gauchos again put a four spot on the Lions. Sophomore first baseman Tyler Kuresa and Newell’s back-to-back singles drove in a run each. Morrow drove in his fourth run of the day with another base hit as he went 2-3 with four RBI and a run scored. Epperson drove in the Gauchos final run with a sac fly to score Venning.

LMU was able to muster some offense late with a three-run seventh inning. Jacome got into his first bit of trouble allowing a leadoff double. He was then lifted for senior pitcher Jared Wilson, who gave up a single to sophomore catcher Chris Barnett, driving in the Lions’ first run. Two more runs would come around to score before Wilson finished off the inning.

The busy week will continue as the Gauchos will take on Pacific at home this weekend for a three-game series with their fellow Big West combatants. The Tigers head south, tied with UC Davis for last place in the Big West.

Pacific currently sits at 13-34 and 5-16 in conference action. The Tigers have, however, gone 3-3 over their last six outings.

The Tiger offense is led by senior third baseman Dustin Torchio. Torchio leads Pacific with 54 hits and 25 RBI on the season. On Sunday against UC Davis, Torchio went 3-5 with three runs scored and an RBI in the 10-7 loss.

On the mound Friday for Pacific will be junior Justin Haberman. Haberman has thrown 61.2 innings this year as he has been the most reliable starter for the Tigers. He currently holds a 5.11 ERA and a 1-5 record but has the ability to throw up some zeros. For his lone win this year Haberman shut down Long Beach State. He threw six inning allowing just one unearned run.

The three game series will be the final three home games for the Gauchos this season. Venning and Wilson will be playing their final home games of their college careers this weekend and will be honored on the field Sunday for Senior Day.

Game one is set for a 3 p.m. start on Friday at Caesar Uyesaka Stadium followed by Saturday’s 2 p.m. start. Sunday’s series finale and final home game of the year will be Extravaganza Sunday at 1 p.m. 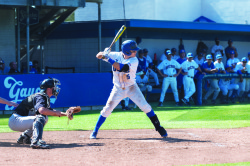