The Daily Nexus
Sports
UCSB Student-Athletes Honored at Golden Eagle Ceremony
May 14, 2013 at 4:51 am by Kristen Henneman

Most colleges say they take pride in their student athletes and their success, not only in their sport but in the classroom as well. At UCSB, we don’t just talk the talk, we walk the walk.

Last night at the Bacara Resort and Spa, 17 student-athletes were awarded for their excellent academic achievement.

The event, called the Golden Eagle Awards, was the 26th consecutive year UCSB athletics has collaborated with sponsors Peter and Gerd Jordano of Jordano’s, the food and beverage company, to celebrate UCSB’s top student-athletes.

“We are extremely proud to reward those who are athletes and also students,” Peter Jordano said. “This event ties people back from the past and the current. The coach from the soccer team (Tim Vom Steeg) was a student-athlete at one time and he was a Golden Eagle Award winner. Now he’s coaching and encouraging those kids. That feels good.”

Golden Eagle recipients ranged in GPA from 3.30 to 3.96, with the average GPA at a 3.52. In addition, just one athlete from each men and women’s sport was represented, making it even more competitive.

“We compliment the mission of UCSB, which is to be top-tier and special in all areas,” Athletic Director Mark Massari said. “Our student-athletes are reflecting that, and nights like tonight, we’re able to show it off.”

Tilleman boasted the highest GPA of any student athlete at 3.96. Earning the honor for the second consecutive year as a graduate student, she studies in the Bren School of Environmental Science and Management. Staahl, meanwhile, is a computer science major with an impressive 3.85 GPA. 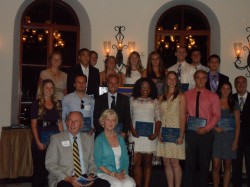