The Daily Nexus
Sports
Gauchos Win In Walk-Off Fashion Again
May 14, 2013 at 4:47 am by Caleb Shoffner

The Gauchos have walked off again. The UCSB baseball team walked off in the bottom of the ninth inning for the second time in just over a week. Last Sunday, junior left fielder Joey Epperson hit a walk-off home run against UC Irvine and yesterday afternoon sophomore Cameron Newell squeezed in the winning run with a drag bunt to seal a 7-6 victory and establish UCSB as the comeback kids.

“Coming back is the mark of a good team,” sophomore first baseman Tyler Kuresa said. “All the good teams I have ever been on have been like this where you just find ways to win. The great thing about this team is you never know who it’s going to be that’s going to step up.”

Santa Barbara improves to 28-21 with the victory and remains at 12-9 in the Big West with the nonconference matchup. Washington State falls to 21-27 with the loss, its third in a row as the Cougars have now lost seven of their last eight.

The Gauchos jumped out to an early lead as they often do at home, scoring a run in the bottom of the first inning. Epperson led off the Gauchos half of the inning with a single, and after he stole second, a two-out single by Kuresa would be all he needed to plate the first run.

Freshman starting pitcher Domenic Mazza pitched well in his return to the mound after a lengthy absence due to back injuries. Mazza threw six innings and allowed just three runs over his final two innings of work.

“I thought [Mazza] did really well there,” Head Coach Andrew Checketts said. “He gave up the two at the end when he was a little gassed but he threw well. He did a great job through the first five. He threw a lot of strikes for us.”

The Washington State bats came alive late as the Cougars were able to tack on six runs from the fifth inning on. Sophomore pitcher Greg Mahle came on in relief for Mazza and worked a scoreless seventh inning before getting touched up for two runs in the eighth.

Freshman designated hitter Robby Nesovic led off the bottom of the eighth with a single and was lifted for a pinch runner. After a sacrifice bunt to move the runner to second, senior third baseman Marc Venning doubled home the tying run to even the score 5-5.

Sophomore shortstop Trace Tam Sing led off the eighth inning with a double and scored on a single by junior catcher Collin Slaybaugh to give WSU the lead.

Down 6-5 in the bottom of the ninth, the Gauchos returned to the small-ball formula that worked in the eighth. Junior shortstop Brandon Trinkwon got things started with a leadoff single. Another sacrifice bunt moved him into scoring position for Kuresa who drove home his third run of the game to tie it back to 6-6.

Kuresa was lifted for a pinch runner who was moved to third on a Mahle groundout. With the winning run on third base, Newell laid down a bunt up the third base line to squeeze in the winning run.

“Fortunately, I got a good pitch to bunt and got it down the line,” Newell said. “It was a good team win today. Good job by Dom on the mound and our guys at the plate picking each other up offensively today.”

UCSB continues its busy week with a trip to Loyola Marymount for a 3 p.m. game tomorrow. 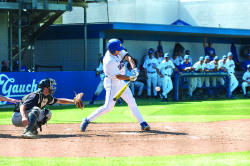