The Daily Nexus
Sports
Surging Gauchos Face Red Hot Northridge
May 9, 2013 at 4:43 am by Caleb Shoffner

After stealing away a series win from UC Irvine last weekend with a dramatic walk-off win on Sunday, the UCSB baseball team will hit the road and head to Cal State Northridge for a three-game series with the second-place Matadors.

Northridge currently sits at second place in the Big West conference behind only Cal State Fullerton. They are just one game behind with a 30-18 overall record and an impressive 14-4 mark in Big West action. The Gauchos, however, have won their last three weekend series with Big West opponents and now sit in fifth place at 25-20 and 10-8 in the Big West.

Northridge heads into the game riding high off of its last win as the team defeated No. 8 UCLA 4-1 on the road on Tuesday, a team the Gauchos had previously fallen to 12-3 way back in February.

Not only have the Matadors defeated one of the top-ranked teams, but they have now won eight games in a row as they head into the weekend series.

UCSB has a lot going for them as well. Since grabbing a win in the series finale at Fullerton, the Gauchos have gone 8-4, capturing three straight weekend series against conference opponents and now have had two straight Big West players of the week and three in the last four.

Junior left fielder Joey Epperson takes the award from sophomore center fielder Cameron Newell this week as he was nearly unstoppable at the plate. Epperson went 8-14, extending his hitting streak to 12 games, with six runs scored, four RBI, a stolen base and a home run. The home run came in the bottom of the ninth with a runner on down by one in Sunday’s series finale with Irvine. Epperson took the first pitch deep against the Anteaters closer. On Friday’s game, Epperson had a four-hit day and was just a home run shy of the cycle.

The Gauchos offense has really found its stride as of late. With the pitching staff struggling to stay healthy, the offense has been more than willing to put up as many runs as needed. Three Gauchos have had hitting streaks of nine or more games, with Epperson and Newell at 12 and 11 respectively. Sophomore shortstop Woody Woodward, who sits at nine games, could have been player of the week as he went 5-12 this weekend with five RBI.

Northridge, however, is second in the league this year as a team in runs scored and RBI. Junior first baseman Josh Goossen-Brown leads the Big West conference with 43 RBI so far this year, as he has established himself as a major threat in the heart of the Matador order.

Junior outfielder Miles Williams is also a player to keep an eye on. UCSB will look to keep runners off the bases while he is at the plate, as he has hit seven home runs this year in just 86 at bats.

The Gauchos and Matadors set to show down at 3 p.m. on Friday at Matador field. Games two and three will both be at 1 p.m. on Saturday and Sunday. 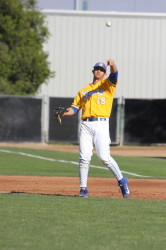