The Daily Nexus
Tennis
Gauchos Are Tourney Bound
May 9, 2013 at 4:44 am by Austin Richardson

For the first time since 2009, the UCSB men’s tennis team will be competing in the NCAA tournament for a chance to win a national championship.

The Gauchos qualified for the tournament thanks to a spectacular postseason run. After losing three matches in a row and five out their last six before entering the Big West tournament, it seemed like the Gauchos hit a cold streak at the worst time in the season. However, seniors Benjamin Recknagel and Mbonisi Ndimande returned to the starting lineup and provided a very important spark to the squad. UCSB first knocked out No. 4 seed Hawaii in the first round 4-2, setting up a showdown with top-seeded UC Irvine. The Gauchos then surprised everyone by dominating the Anteaters 4-1 to set up a final match against Pacific.

In the final, the Gauchos took down the Tigers 4-2 to win their first Big West tournament title since 2009 and earn an automatic bid to the NCAA tournament.

It will be the 10th appearance in the NCAA tournament for the Gauchos and the seventh under current head coach Marty Davis.

In the first round of the tournament, UCSB will take on the No. 11 seeded Pepperdine Waves.

The Gauchos are somewhat fortunate with the draw as the other two options were USC and UCLA. USC has won the last four national championships and UCLA is entering the tournament as the No. 1 overall seed.

However, Pepperdine is not necessarily an easy draw, evidenced by their overall record this season of 24-5.

In addition, the Waves will be hosting the first round of the tournament and thus will have home court advantage.

The Waves are ranked No. 12 nationally and recently won an unprecedented 40th West Coast Conference title by defeating No. 39 BYU 4-3 in the conference final.

The Waves have considerably more NCAA tournament experience than UCSB and this year will mark the 33rd appearance in school history. During that time they have amassed a 51-31 tournament record, and in 2006 won the national championship.

Last season the Waves upset No. 2-seeded Georgia in the quarterfinals before losing to Virginia in the semifinals 4-1.

The last time the two teams played each other was in 2011, a match that Pepperdine won 7-0.

Pepperdine and UCSB will face each other on Friday at 1 p.m. at Ralph-Straus Tennis Center in Malibu, California. The winner of the match will go on to the second round to play either Stanford or No. 20 LSU. 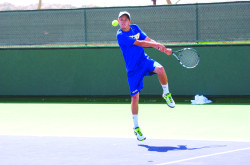