The Daily Nexus
News
UCSB Professor Cohen Weighs In on North Korea’s Nuclear Threat
April 29, 2013 at 5:00 am by Gregory Ferguson 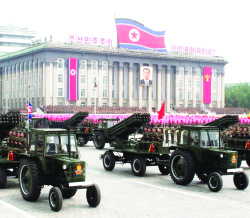 Tanks roll through the
streets of a North Korean city. This is part of the totalitarian
state’s renewed aggressive rhetoric towards its
counterparts. PHOTO COURTESY OF thefutureforum.org A
version of this article appeared on page 3 of the Tuesday, April
30th, 2013 print edition of
the Nexus.