The No. 16 UCSB women’s water polo concluded its year with a sixth place finish at this weekend’s Big West Tournament. The Gauchos lost two games to No. 8 San Diego State and No. 14 CSU Northridge while compiling a win against No. 18 UC Davis.

On the year, Santa Barbara accumulated a 20-15 overall record with a 2-5 mark in Big West play.

UCSB began its first round Friday against third-seeded San Diego State. The Aztecs took control early on offensively and defensively with seven goals in the first half while holding the Gauchos to a mere two points.

SDSU continued its stingy defense in the second half by keeping Santa Barbara scoreless en route to an 11-2 victory for the Aztecs.

Senior attacker Shelby Haroldson and freshman utility Holly Smith each recorded a goal for the Gauchos in the loss.

UCSB followed up Saturday with a come-from-behind 10-9 win over seventh-seeded Davis. After trailing 6-4 at the half, the Gauchos cut the deficit to a one-point game with a 3-2 quarter heading into the final period.

The Gauchos faced the fifth seed CSU Northridge in their final match of the tournament. After a quick score from Haroldson to start the game, UCSB would fall behind for the rest of the match.

Facing a 10-4 deficit in the fourth, Santa Barbara rallied back with a goal from Haroldson and two scores from Murphy, however the push was not enough to get the Gauchos back in the match. Despite a three-goal performance by Murphy, UCSB lost in its final game, 10-7.

Santa Barbara leaves the tourney maintaining the same six spot in the Big West it had coming into the championship.

While the Gauchos are unlikely to capture one of the eight bids awarded for the NCAA Championship, UCSB notably finishes its year with its second consecutive 20-win season and two players — freshmen Samantha Murphy and Jessie Porter — placed among the top 10 goal scorers in the Big West conference. 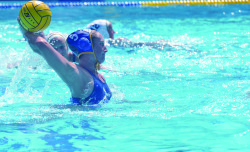 A version of this article appeared in page 5 of April 29, 2013’s print edition of The Daily Nexus.

Photo courtesy of The Big West.