After a long stretch of tough scheduling, UCSB track and field took both ends of their weekend dual meet against Cal Poly. The men’s side ended up winning 101-96 in Saturday’s competition, while the women won 102-96.

After a rough start in which the Mustangs won five events to begin the day, UCSB picked up their first victory when junior distance runner Bryce Rausa won the men’s 1500-meter with a time of 3:55.86. The win inspired the Gauchos to three straight victories, bringing them back into the competition.

“Although we were lacking in numbers, we still were able to win on both sides and help UCSB in the Blue-Green rivalry series,” junior distance runner Dani Moreno said. “Today was really cool because we had people in events that they had never done before.”

As Head Coach Pete Dolan predicted earlier in the week, junior sprinter Jordan Scott came up big for the men’s side. After UCSB couldn’t pull out a win in the women’s 400-meter dash, Scott won the event on the men’s side with a time of 47.47.

“We have a lot of our top athletes that we’re resting this weekend in preparation for conference,” Dolan said. “If our men’s team is going to win, we need a big weekend from Jordan and Marquis [Caldwell, senior sprinter].”

Junior Grace Esslinger followed Scott with a convincing victory in the women’s 100-meter dash [11.86] before Cal Poly came back with three straight wins. UCSB battled back, winning three events of their own before losing the 3000-meter distance run. The meet remained close heading into the relays.

It was a big weekend for Esslinger, who also won the javelin event [38.86] and set a personal record in the 100-meter. When asked about her accomplishments in the meet, the humble multi-athlete said simply, “It was a good weekend.”

Even though Poly won the last two events for the day, senior Derek Masterson’s dominant victory in the javelin [62.65] was enough to secure the win for the men’s side. Esslinger’s win in the same event was enough to lock up the victory for the women.

Other notable accomplishments include Mustang senior John Prader, who broke a 16-year old school record in the pole vault.

UCSB resumes competition with the Big West Multi-event Championships on May 3 in Northridge, California. 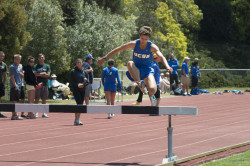 Photo by Mark Brocher of The Daily Nexus