The Daily Nexus
Sports
Gauchos Capture Series Against Northridge
April 29, 2013 at 4:11 am by Michael Jorgenson

UCSB utilized a balanced offensive attack to take two out of three games this past weekend against Big West opponent Cal State Northridge.

After splitting the first two, UCSB and Northridge played their most closely contested game in the weekend finale.

The Gauchos struck in the first inning off a Matador fielding error on a single by freshman outfielder Arianna Palomares. Soria scored to put UCSB up 1-0, followed by a Palomares run later in the inning.

Soria picked up an RBI in the second inning as junior first baseman Lauren Boser reached home to put the Gauchos up 3-0.

UCSB tacked on two more runs in the third inning to go up 5-0 before Northridge made a strong rally in the fifth.

The Gauchos subbed in junior pitcher Andriana Collins for freshman Alex Pingree to start the inning, and the Matadors quickly took advantage. They started the inning with a RBI by junior utility Leann Lopez followed by a two-run single by senior outfielder Korinne Randazzo to cut the Gauchos lead to 5-3.

After two outs, sophomore utility Crystal Maas tied the game with a two-run homer. Now tied 5-5 and with two outs in the fifth inning, Boser, already with a triple and a double in the game, knocked her third home run of the season over center field to give UCSB a slim 6-5 lead.

The Gauchos put sophomore Shelby Wisdom in at pitcher, as Wisdom gave up just one hit and came up with her second save of the season as UCSB held on to win.

In the second game, a Gaucho offense that was on fire for most of the weekend was shut down by a strong Matador defense. Northridge took the lead in the top of the first when sophomore first baseman Tanna Bindi flied out to left field, bringing home Randazzo.

Neither team scored again until the fifth when the Matadors added two more runs, one of which came off a triple by Bindi.

UCSB failed to put any runs on the board, resulting in a 3-0 final and Northridge’s only win of the weekend.

The weekend’s opener was a defensive exhibition the other way, as Wisdom shutout the Matadors through five innings as the Gauchos took their first run rule win since mid-March.

After UCSB took an early 1-0 lead off a single by senior shortstop Keilani Jennings, the team put together its best offensive inning of the season in the third. With the bases loaded, Wisdom doubled to right center, bringing three runners home. Singles by Palomares and Boser followed, bringing Wisdom and Jennings home.

Soria was walked with the bases again loaded, bringing the Gauchos lead to 7-0, and junior second baseman Kathryn Pilpil capped it off with another RBI.

Wisdom added to her team-leading RBI totals with three in the game, and Soria was a perfect 2-2 with one RBI.

UCSB travels to No. 20 Hawaii next weekend for three games against the Big West’s top team. 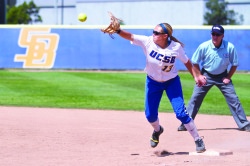 A version of this article appeared on page 5 of April 29, 2013’s print edition of The Daily Nexus.

Photo by Peter Vandenbelt of The Daily Nexus