The NFL draft begins on Thursday and will conclude on Saturday in what will be a marathon of a three-day event where many teams will fill their biggest needs with promising young stars. Last season, five rookie quarterbacks started in the first week of the season. This year, however, there is a lack of elite quarterback prospects, with the majority of the top players in this year’s draft sitting on the defensive side of the ball. Linemen on both sides of the ball will be the story of the 2013 NFL draft. Here is a look at the biggest needs for each of the first 10 teams selecting along with a projected selection.

Although Kansas City has needs along the defensive line as well, I don’t see the Chiefs passing up a franchise left tackle in Joeckel who currently ranks as the top overall player on most experts’ draft boards. With this pick, Kansas City can solidify the important left tackle position to protect their recent investment in former 49ers quarterback Alex Smith. Joeckel gives the Chiefs a dominant and well-balanced blocker who can give the quarterback time and open up lanes for running back Jamaal Charles.

Jacksonville could go a number of ways here but, as has been the sentiment for what seems like the past decade, the Jaguars need help in the pass rush. Jordan is one of the best athletes in this year’s draft and is a proven commodity with his level of production for a successful Oregon program. He can definitely help to improve Jacksonville’s pass rush and switch between defensive end and outside linebacker.

After a few mediocre seasons in which they showed signs of life, Oakland returned to the bottom tier of the NFL once again after a disappointing season. The Raiders have a number of needs and could look at Geno Smith here, but that pick would be a reach so I have them taking Floyd, a dominant run stopping defensive tackle who can help the Raiders bulk up along the defensive line.

So much for new head coach Chip Kelly making a giant splash with his first pick in the draft. Pressure is on the Eagles to find a new franchise quarterback in Geno Smith, but Smith would once again be a reach here. Fisher would provide the Eagles with a solid tackle that can play on either the right or the left side and help protect whoever Philadelphia decides to run out at quarterback. Maybe Philly makes a move later in the draft to get Geno.

Cornerback isn’t the most pressing need for the Lions, but it certainly couldn’t hurt to have a defensive stopper like Milliner, especially in a division where the Lions must face the Packers and Aaron Rodgers twice a season. If Fisher is available here, I think the Lions’ priority is finding pass protectors to keep Matthew Stafford upright and healthy, but, in this case, Milliner is the choice.

Ansah is a raw prospect with as much potential as anyone in this year’s draft, but he is somewhat unproven. Cleveland needs help with the pass rush and Ansah seems like the player with the highest potential reward. He is a freak of an athlete that can really help provide the Browns with a defensive presence to create havoc for opposing quarterbacks.

This draft is full of impressive linemen on both sides of the ball and it shows with the third offensive linemen taken already. Arizona doesn’t need a quarterback now that they have Carson Palmer, so the Cardinals should focus on improving the offensive line. Johnson is the best available prospect in terms of value and need. He may not be as talented as Joeckel or Fisher, but Johnson presents a solid prospect that can help to solidify a weak Arizona line.

Warmack is one of the most impressive offensive guard prospects in the last several years and will help Buffalo to establish a pretty good offensive line. The Bills could reach for a quarterback here so Ryan Nassib makes sense for Buffalo, but not this early in the draft. Look for Buffalo to address the quarterback situation in the second round or trade up into the later parts of the second round.

The Jets sucked last year and that mainly falls on the lack of quality quarterback play. Unless the Jets find a match with either one of their two first round picks, they may stick with Mark Sanchez for another season and help to reload what used to be a scary defense. Mingo adds versatility to a Jets defense that is in need of an intimidating pass-rusher, especially when facing Tom Brady twice a season. Without Darrelle Revis, the Jets need to refocus on bringing back that defensive mindset that helped them advance to the AFC Championship two years in a row.

Cooper is a more athletic guard than Warmack and can provide the Titans with a solid player to help create room for Chris Johnson. Cooper’s athleticism will prove valuable when he is pulling downfield and setting up blocks for Johnson. Tennessee needs pass rushing help and could look at Star Lotulelei, but the defensive tackle is more of a run-stopping specialist.

Overall, I’m projecting five offensive linemen and four defensive linemen to go in the top 10 with the only non-linemen being Dee Milliner. This draft class is obviously rich with linemen on both sides of the ball. I feel that no teams will choose a quarterback in the early parts of the first round and will instead wait to either trade up into the first round or wait until the second round to find their man.

Quarterback is the most important position in the game, but there is no sense in forcing a pick when there are talented linemen galore available. However the draft shakes out on Thursday, be sure there will be surprises aplenty. This year’s NFL draft is as hard to predict as any in the last decade. 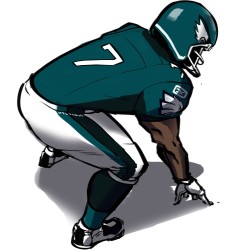 A version of this article appeared on page six of April 23, 2013’s print edition of The Daily Nexus.

Art by Mingchen Shen of The Daily Nexus.