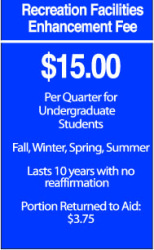 This year, the “Flip the Switch for Student Recreation” fee — which charges students a quarterly fee of $15 — is up on this spring’s Campus Elections Committee ballot, potentially enabling improvements to Robertson Gymnasium and other athletic facilities on campus.

The initiative would provide funding to renovate Robertson Gymnasium, Storke Field and Pauley Track. Payments would begin Fall 2013 and continue until 2023. Remodeling would take place through a three-phase plan that would begin this year, with complete improvements to Robertson Gym expected to be completed by 2014, and renovations to Pauley Track would take place from 2014 to 2016 while improvements to Storke Field would be made from 2016 to 2020. Once repairs are completed, the fee would drop to a $2 maintenance charge. This initiative modifies a similar version introduced in Spring Quarter of 2011, which also required a $15 lock-in fee but failed to pass.

“The students who are leading this campaign do expect a more favorable outcome. Although there are similarities with the initiative in 2011, this initiative was reengineered to have a wider positive impact for more students,” Bargar said in an email. “The initiative increases the safety and usability of three very heavily used recreational facilities in need of repair and renovation.”

“Renovating these facilities would not only help students by having a gym that doesn’t leak every time it rains, or building a track that the team can actually practice on, but also benefit the community [and] everyone who comes to use the track and Storke Field,” McGowan said.

Pauley Track has been deemed unsuitable for competitive use, and currently lacks a nighttime lighting system. Passage of “Flip the Switch” would provide funds for resurfacing the track, as well as funds to install an all-weather turf in the eastern section of Storke Field and lighting for both facilities.

UCSB Men’s and Women’s Track Head Coach Pete Dolan said there is a strong need to renovate campus sport facilities, as these services would benefit all students.

“Of course I am excited about the possibility of having the track fixed. As all can see, it is in dire straits. I think it could be a great resource for the university when repaired,” Dolan said. “The installation of lights will really open this up for the students looking to stay fit. There is something about running laps at night that draws everybody.”

Reconstruction at Robertson Gym would include a complete restoration of the main gym as well as floor refurnishing, cosmetic upgrades, new ceilings and paint. While these improvements would impact visitors to the Recreation Center, some students are wary of paying more than the current $83.53 collected for all facilities per quarter.

“I see the ‘Flip the Switch’ campaign as a politically neutral issue. I am a frequent Rec Cen user and I certainly do not oppose the suggested improvements,” Gilbert said. “However, as an out-of-state student, I already pay an exorbitant amount of fees each quarter, and I am extremely reluctant to continue adding to them. UCSB, and the entire UC system, continues to spend money as if we aren’t in a strained financial situation.”

In fact, Gilbert said funding for campus sports facilities should be gathered from elsewhere in the university budget, as students already pay such high fees.

“I think a more rational solution would be to take the money from somewhere else in the budget to use for these improvements,” Gilbert said. “If ‘Flip the Switch’ is a priority for students, then cut spending somewhere else, instead of continuing to raise student fees.”

A version of this article appeared on page 13 of the April 18th, 2013’s print edition of the Nexus