The UCSB baseball team concludes its four-game road trip with a one-game showdown against the University of San Diego tonight. The Gauchos make the trip after dropping two out of three games to Cal State Fullerton over the weekend, but ended the series with a win, handing the Titans their first conference loss.

“Going into [Fullerton] we played with some confidence. We beat Cal Poly two out of three and beat Pepperdine in a close game and the guys played well on Friday and then we lost our poise,” Head Coach Andrew Checketts said. “But on Sunday we did a really good job of controlling their offense. After the win Sunday, we feel like what could have happened in the series but every game has a woulda coulda shoulda and we need to come out and do.”

Heading into the match up, the Gauchos hold an 18-16 record and are just 4-5 in the Big West conference. Despite handing the first place Titans their first loss in league play, UCSB is still in the bottom four of the Big West. USD is 20-15 overall and holds a 6-6 West Coast Conference record.

UCSB is 4-3 against the West Coast Conference this season as they split a four-game series early on against San Francisco, split two meetings with Pepperdine and defeated Saint Mary’s in their one meeting this year.

On the mound for the Gauchos will be freshman Connor Baits, who pitched one week ago today at Pepperdine in a 5-4 winning attempt. Baits pitched a solid six innings as he struck out six and allowed just three runs on nine hits. Baits pounded the strike zone in his first win of the year as he did not allow a walk.

The Toreros have struggled as of late dropping four of their last five games, including three at home. Last weekend, USD dropped a three-game series to Pepperdine, the team Baits had pitched so well against last week.

San Diego’s offense is led by junior third baseman Kris Bryant, who leads nearly every offensive power category in the WCC. Bryant has amassed 15 homers thus far this season. That is eight more home runs than anyone in the WCC or the Big West. His 36 RBI lead the WCC as does his .811 slugging percentage, over .230 points higher than the second place hitter. He also has a .515 on base percentage and 43 runs scored.

The Gauchos will need to keep Bryant’s bat quiet and put up some runs of their own. Santa Barbara was held to just seven runs over the weekend after they hit well against Cal Poly and Pepperdine last week. Sophomore centerfielder Cameron Newell had been on a tear but saw his 12-game hit streak end Sunday, while sophomore second baseman Woody Woodward continued his streak to eight games to spark the Gaucho attack.

“Woody has really swung the bat well but nobody really hit well on Sunday,” Checketts said. “We need to get Trinkwon and Nesovic going a little bit behind them but Newell and Woodward have really done a good job of table setting for us.” 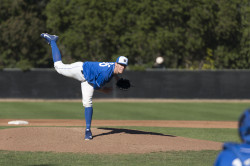 A version of this article appeared on page 6 of April 16, 2013’s print edition of The Daily Nexus.