According to Leisz, a third-year environmental studies and sociology major who competes in the equestrian Intermediate Flats division, the progression to Nationals occurred after both girls placed top two in Regionals in their separate divisions and advanced to Zones. The two equestrians then placed in the top two in Zones to advance to Nationals.

“Celia and I are very excited,” Leisz said. “I’m dedicated to horseback riding, and I’ve always been passionate, so this is a pretty cool opportunity…there will be colleges from all across the country there.”

In addition to organizing team activities, events, travel plans and other competition logistics as team captains, both Leisz and Turner also practice three to four days a week, several hours per day.

Turner, a third-year communication major and equestrian Intermediate Over Fences competitor, said her position has given her the opportunity to hone her leadership and time management skills.

“Being a captain has been a great learning experience,” Turner said. “It really taught me a lot, in terms of the organization, and I learned how to get things done as efficiently and effectively as possible.”

“Those particular two have years of experience riding, a strong passion for the sport, and a lot of dedication and willpower,” Snowden said. “I wish them both good luck, a great experience and a great time.”

During the competition, riders are given a horse they have never ridden before and judged based on their ability and skill in riding — including nuances such as position and form. After advancing all the way to the national level, Turner said she was overjoyed when she learned the results.

“It felt really unreal. I felt like I was going to cry,” Turner said. “I was so unbelievably happy. I’ve been riding for 12 years, my whole life.”

According to Snowden, Turner and Leisz stand as phenomenal examples of the possibilities for the UCSB Equestrian team’s future achievements.

“I think for UCSB Equestrian team and for equestrian teams in the Santa Barbara community in general, this is an eye-opener for what horses can do for us and what we can do for horses,” Snowden said. “I hope this invites people in and piques the interest of others to join the team or check out competitions.” 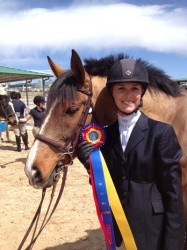 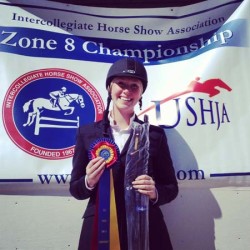 Celia Turner (left) and Becky Leisz (right) show off their awards from the Intercollegiate Horse Show Association Championship. The
Co-Captains of the UCSB Equestrian Team will travel to Harrisburg, PA in hopes of continuing their success at the IHSA Nationals.

A version of this article appeared on page 5 of the April 10th, 2013’s print edition of
the Nexus