The University of California held a global forum yesterday focused on addressing the issue of worldwide hunger by bringing together researchers, farmers, environmentalists, policymakers and other sustainability experts from 31 different countries for an all-day seminar.

The over-arching goal of the conference — which consisted of two moderated panels and two keynote speakers — was to discuss methods of preserving global natural resources in a way that would allow eight billion people to have access to affordable food by 2025. The forum took place in Ontario, California as part of the university’s Division of Agriculture and Natural Resources Statewide Conference.

The first half of the seminar covered global issues such as restructuring the organization of the agriculture sector, the effects of climate change and how to proceed in the face of technological and resource limitations. The second portion narrowed the ambitious scope of the discussion to only statewide issues, examining the moral obligations of the California agriculture industry, the balance between scientific advancement and ethical considerations and methods of expanding California’s socially conscious influence to other regions.

According to Barbara Allen-Diaz, UC vice president for agriculture and natural resources, the forum is a way of channeling the immense resources that the UC has at its disposal towards confronting one of the most prevalent problems facing the world today.

“As a public research university, we’re a recognized leader in tackling the world’s toughest challenges,” Allen-Diaz said in a press release. “Building on our expertise in agriculture and finding practical, science-based solutions, it falls to us to convene these sorts of conversations and look far beyond the borders of our campuses.” 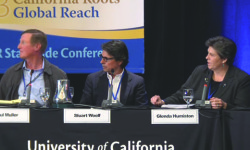 Forum participants listen and discuss issues at one of the two panels. The seminar covered global hunger and different aspects of it, such as the agricultural sector, climate change and resource limitations.

A version of this article appeared on page 1 of the April 10th, 2013’s print edition of the Nexus