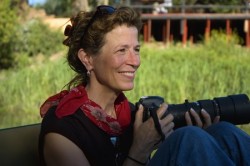 “I’m a big kick-the-fear-out-of-my-life kind of person,” said National Geographic photographer Annie Griffiths to the audience gathered in Campbell Hall this past Sunday. “The more [traveling] you do, the less fear you have.” Arts & Lectures brought in Griffiths as part of their National Geographic Live! series.

One of the magazine’s first female photographers and youngest hires ever, Griffiths is a pretty fearless person. She’s done stories in Arabia, Baja California, Galilee, Petra, Sydney, New Zealand and has been to more than 100 other countries. She is also poignant, funny, thoughtful and an absolute delight to talk to. Her primary work right now is being the executive director and founder of Ripple Effects Images, a nongovernmental organization that photographs people in need.

No stranger to airplanes, Griffiths flew in for the lecture after a month of traveling from Peru to Easter Island to Samoa to Australia to Cambodia to China to Tibet to Egypt to Tanzania. Saturday she was in Morocco. Despite all the jet-lag that she should have had, she led a remarkably entertaining lecture and took us on a journey through her life.

Her first international assignment was in 1978, when she was sent to Namibia to get photos of a nomadic tribe who had been experiencing seven years of drought. After snapping the photo of three women with her Polaroid, Griffiths casually handed over the snapshot so they could watch it develop. As soon as their faces filled the film, they fell to the ground laughing and rolling and pointing at each other. Without a word of shared language, Griffiths quickly understood them to be saying, “That’s you!” “No, that’s not me!” “Yes that’s what you look like!” It dawned on her that none of them had seen her own face before, and it surprised her how easy it was to comprehend what they were saying.

She realized then that everyone is a human being and it is much better to be an idiot pantomiming and looking someone in the eye than it is to travel with an interpreter. For Griffiths, the whole world was starting to open up and body language became her mode of communication.

Griffiths was sent to every state in America for stories and became very appreciative of her own stars and stripes culture. Once she was invited to the middle of nowhere to take photos of a family branding. One morning at the ranch, she woke up to a beautiful light, amazing sky, and a sun coming up over the horses in the pasture. Of course, she ran out to the fence with her camera snapping shots like a madwoman.

When she turned around, she noticed four cowboys looking at her like she was a crazy lady. And then she realized that she was just wearing a t-shirt and underwear. Her takeaway from this embarrassing skivvies-showing experience?: “I wish for each and every one of you to have a passion in your life, something so motivating that you forget to put your pants on!”

A lesson that Griffiths learned in her early days of working for the magazine was that a picture is just being ready for something real that happens. This realization came when she went swimming in Victoria Falls with Zambian natives. They went jumping in a little indentation in the rock, a dozen meters away from the edge. It was a thrilling experience for Griffiths, but the best part came when they were packing up to leave and one of the natives stood at the edge of the falls having a quiet moment. She snapped a picture of him standing at the top of the world, at his home. This was something real, and she was ready with her camera.

Eventually Griffiths had two kids, whom she vowed to never be away from for longer than fourteen days. Since her assignments were usually two to three months, she packed them along with her camera bag and took them on her travels.

They spent five years in the Middle East, riding donkeys and camels and milking goats. She spent a heap of a time hanging out with Arab women, cooking and doing laundry with them.

In Jerusalem, one of her big goals was to be inside the Dome of the Rock with the women for the last day of Ramadan. At the Dome, women gather and welcome the dawn, which breaks the fast and signals the end of Ramadan each year. After being told “no” by the Grand Mufti at his own dinner table, Griffiths went back to her apartment feeling defeated, until a young woman knocked on her door at 4:30 the next morning saying, “Dress modestly and bring only one camera.” The young women created a diversion as Griffiths ducked into the mosque and she was able to photograph something that had never been photographed before. Apparently, the Grand Mufti had said no, but his wife said yes.

As time went on, Griffiths had immense gratitude for having such wonderful work and family and wanted to start giving back. Her first NGO project was a book called Last Stand: America’s Virgin Lands, which compiled photographs of the last of America’s wilderness. This little book raised more than a quarter of a million dollars for a grassroots donation effort.

After the book was published, she started taking photos for Habitat for Humanity, and she spent a lot of time in refugee camps. At the worst refugee camp she had ever seen, she took pictures of a Somali woman and her sick baby who were amongst 70,000 other people. Upon taking these desolate photos, Griffiths felt pretty heartbroken that she couldn’t make a difference for these women and their babies.

Two years later she saw the same picture taped up on the wall of a refugee aid program. Unconsciously she said, “Oh boy that looks familiar.” The man in the room responded, “Oh yeah! And she’s doing great. She’s working at Kentucky Fried Chicken, has a job at Walmart and had another baby.” At this point of the story, Griffiths shouted into the microphone at Campbell Hall, “Oh for Pete’s sake! Don’t EVER give up.”

That Somali woman inspired Griffiths to create Ripple Effect Images, an organization that vets programs that are innovative and sustainable and focus on women and girls. Griffiths and her photographer friends gave organizations pictures to promote the work they are doing in third world countries. In three years, REI has helped raise a million dollars.

One NGO that REI has photographed is this aid organization in India which teaches women trades. In one segment, they teach women how to make solar lanterns. Griffiths explained that women build fifty lanterns (which they get to take home) and then fix a lantern for the final exam. After schooling is completed, they are allowed to go back to the community and give their friends light for the first time in their lives.

With poise, sentimentalism, and a sparkling demeanor, Griffiths finished her lecture by discussing Pakistan. She talked about how she stayed at a remote village and the women brought her the best cot, best blanket and a bowl of soup. After finishing the soup they asked if she would like music. Upon saying yes, six elderly men came out with handmade instruments and played music until Griffiths fell asleep.

“This is the extraordinary nature of my work,” said Griffiths. “I promise you that none of these people had heard of “National Geographic.” They just took in strangers – [I learned that] people who have nothing give everything. So I am committed in my lifetime to give a little something back.”

After the lecture, I talked to two women who were waiting in line for Griffiths to sign a copy of her book, A Camera, Two Kids, and a Camel. All three of us marveled at the photojournalist’s amazing courage.

“After seeing Annie, I am a fan. I love everything she stands for – especially women helping women. That resonates with me so strongly,” said Gayle “Zing” McQuown, who came to the lecture as an addition to her Lake Cachuma camping weekend.

A Santa Barbara local and Daily Nexus reader, Claire Penick, was grateful to have found an organization to donate to. “I have been searching for a nonprofit to donate a little money to here and there, hoping that it actually goes to a person [in need].”

As I waited patiently for my turn to speak with Griffiths, she greeted me with the warmest smile and gave me journalistic advice and her phone number, just in case I had any further questions. If I hadn’t just spent an hour listening to her lecture, I wouldn’t have guessed she was a huge celebrity in the photo world. She treated me like my own mother would, thoughtfully and sincerely.

It’s comforting to know that there are people like Annie Griffiths in the world: women who do beautiful work and truly care about making connections with people.

A version of this article appeared on page 7 of January 24th, 2013’s print edition of the Nexus.