The University Council-American Federation of Teachers is holding informational pickets across all University of California campuses, advocating for better job security and pay. 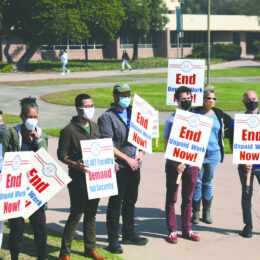 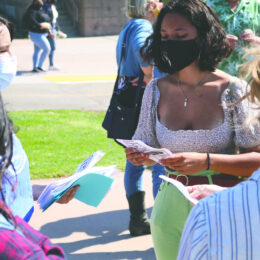 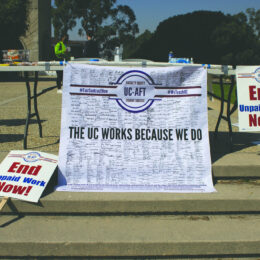 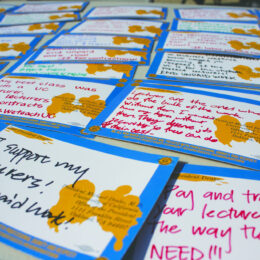 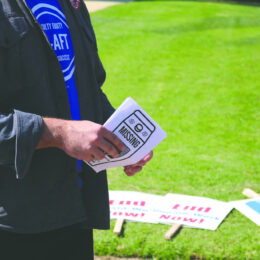 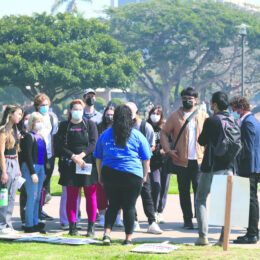 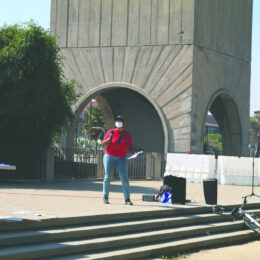 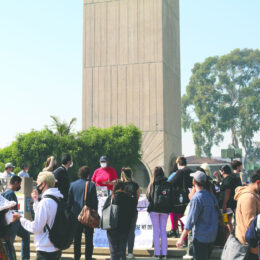 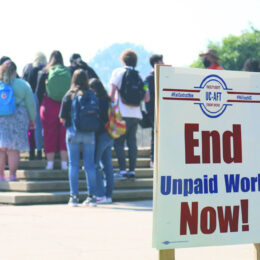 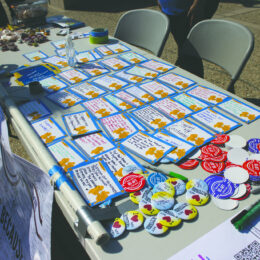 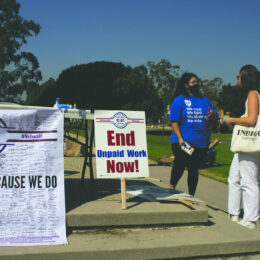 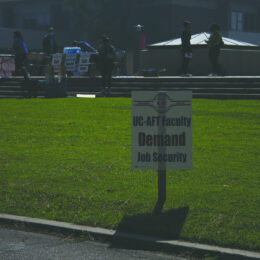 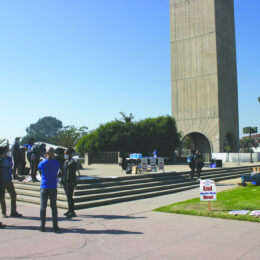 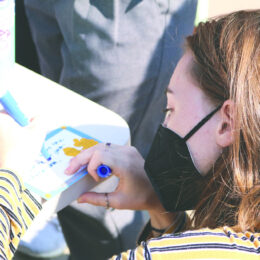 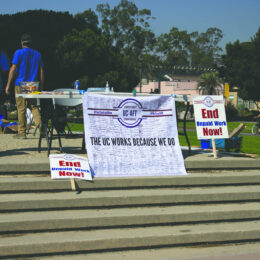 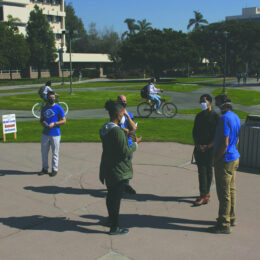 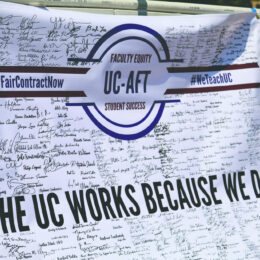 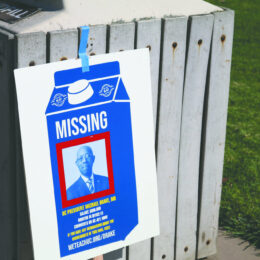 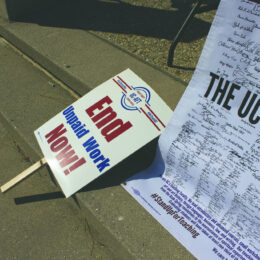 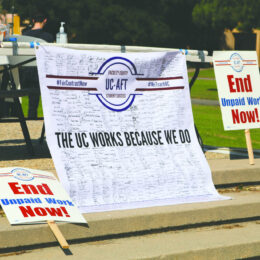 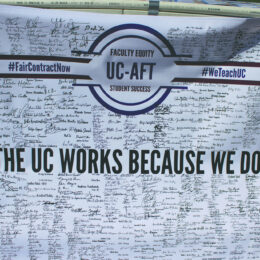 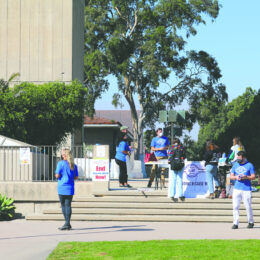 The University Council-American Federation of Teachers (UC-AFT) is a union that represents the UC’s non-tenure-track teachers and librarians. The union has been trying to renegotiate lecturer contracts for over three and a half years, arguing that the lack of job security and low salaries are unfair compared to CSUs’ and community colleges’ contracts that keep lectures on longer and pay more. The median annual salary of a UC lecturer is $19,067.

Negotiations between the union and UC management began January 30, 2019. One year later, lecturers’ contracts expired during negotiations, and UC lecturers have been working without one ever since. After over a year and a half of negotiations with management and no agreement made, the union voted in May of this year to authorize a strike, giving union leaders the power to call one when they see fit.

“This is an informational picket that is part of our bargaining process to make sure that the campus community and the larger community understands the stakes involved with our job security and workload issues,” Bill Quirk, executive director of UC-AFT, said at the 10 a.m.-2 p.m. picket at UC Santa Barbara’s Storke Tower.

During the informational picket, Quirk added that the purpose of the picket is for the broader community to understand why lecturers are concerned with their job security and workload.

“We are organizing toward a strike in the case that the university does not meet our core demands in bargaining around job security and workload. And the things that we’re demanding are basic.”

The union concluded its period of mediation and is beginning the process of fact-finding where both sides submit various documents related to their arguments and have the opportunity to request any records they need. This is a step required by the state government, which the union sees as an effort to “delay and even prevent workers from going on strike,” according to their website. The union is barred from calling a strike related to this contract dispute until the fact-finding process has ended.

The union is also debating whether or not to strike later this fall regarding multiple unfair labor practice charges they have filed against UC management. The union cites management’s refusal to negotiate with the union regarding additional costs that lecturers incurred beginning in March 2020 as the pandemic forced lectures online. Remote instruction led to accrued costs from buying webcams, upgrading their home internet — and in some cases — having to buy entirely new computers to run class.

However, the union clarified that any strike occurring this fall would be over unfair labor practice claims, and would not be correlated with their contract negotiations regarding pay and job security, for which the picket was organized.

For lecturers attending the informational picket, frustration stems from the lack of connection between work performance and employment. Lecturers are hired on a yearly or quarterly basis, according to Quirk. Tenured professors, however, do not run the risks associated with job insecurity and have a higher pay.

“[This is] in the hopes that if lecturers who are in positions longer are good teachers, [and] if our students get some value out of taking our classes that that be recognized,” said Chase Hobbs-Morgan, a lecturer in the political science department.

“The big outcome that on a personal level, I would love, would be to move toward longer term contracts and security of employment for lecturers.”

For Hobbs-Morgan — whose partner’s tenured job at UCSB allows them to continue living in the area — the differences between tenure-track faculty and non-tenure-track lecturers can create an uncomfortable working environment.

“There’s a division between tenure-track faculty and non-tenure-track lecturers that makes it so we don’t quite feel like we’re part of one community. And that, I suppose, — again, to put it sort of plainly — it just is awkward,” they said.

“It is awkward working in a place where someone in my position is not quite sure where or how we fit into a department. We don’t feel like part of the same group of people who work … and yet we teach all the same students.”

Nick Jurkowski, a lecturer in the music department, said that the lack of job security is a yearly source of stress.

“There’s just no job security at all, and it’s very easy for us to kind of fall between the cracks,” he said. “For example, I very frequently will get into summer and still have no idea what my employment status will be in the fall, which is fairly stressful having two little kids at home.”

“The way that the system has evolved, which really relies on lecturers, has not kept pace with the realities on the ground for us and trying to have stable employment and being appropriately compensated.”

Jurkowski hopes that students will understand just how many of their classes are taught and run by non-tenured teachers.

“I’m mostly hoping that they understand just how much the university relies on us and really, the realities we live under in order to do what we love, which is to teach undergraduates,” he said.

While the prospect of a contract-related strike remains months on the horizon as the union sifts its way through the administrative process, there is still the possibility that the unfair labor practice claims made by the union could result in a strike as soon as this quarter.

“It’s going to be really important for our members to understand that if we strike this fall that it’s about the unfair labor practice; it’s also about the overarching sort of disrespect and refusal to negotiate by the university, like that’s the main frame,” Quirk said.

Thanks for the info. I have never before heard a unanimous stance taken by 18,000+ undergraduates on any position. How long did it take to interview 20K folk?

If you ain’t paid by the UC your either an idiot or a cuck which is it?

There are Lecturers with security of employment (SOE). They are interviewed by the dept and extensively vetted by various agencies of relevance. There are also part time lecturers, They do not go through the same vetting and are not considered for FTE status as part of their job criteria. Yes, FTE comes with a number of job related advantages. If the part time lecturers feel they should be given the same or similar “perks” (e.g., job security), then they need to go through the same vetting process as the SOE lecturers and earn FTE status. At present they ask for… Read more »

Qwert…please get some basic information before you comment. Around 1/3 of lecturer are full time. Many of the full time lecturers have been teaching at UC for years. Many of the LSOE lecturers you mention were hired from the non-senate lecturer faculty positions that this article is about. You seem to know something about faculty positions, but you still get it all wrong…while trying to drive a wedge between faculty groups on campus. Over all, super lame comment.

I have no idea what you are bloviating about. Calm down before you have an aneurysm. Nice, thoughtful response from an executive director of teachers. Speaks volumes.

I simply noted that lecturers with SOE have been vetted through an extensive process including the dept, dean, CAP, and others.

Part time lecturers have not (there may be exceptions. If they want to apply for FTE lecturer positions that is fine).

And why in the world would I care to drive a wedge (do not bother to answer — it is purely rhetorical)?

My use of “part time” was technically incorrect. I meant that they were not FTE or lecturers with SOE (i.e., they had not gone through the same vetting process and did not have the same job requirements).

I am so very sorry that my ill- considered shorthand so severely compromised my comment that you felt a need to blow steam about my understanding of the processes involved. I guess those three long years of CAP and 1,800 case reviews rendered me lame. Thanks for your thoughtful and helpful insights. I feel a greater affinity toward your position in consequence.

The issue is that the university and individual departments have become all-too comfortable just stringing along temporary lecturers without any intention of ever offering them the opportunity for FTE. I have seen lecturers being strung along like this for 10 or more years before finally begrudgingly being offered the absolute minimum FTE position and workload because it would be too much of a PITA for the dept to fund someone else to take on their courses and/or redesign that curriculum if they left. That’s a decade of serving a department with no benefits or consistent promises of course load. I’m… Read more »

That was a thoughtful answer and i thank you. Maybe you should be the Executive Director of Teachers instead of Quirk. At least you provided well-considered, informative and relevant information in response to my initial email comment. Thanks.

Qwert why are you shilling out for billionaires? Does the boot taste that good or are you just so vapid and mindless you have no other course of thought but to support people who ruin your education?

By the way. This problem would be greatly mitigated if we made the Faculty teach at a level commensurate with their job hiring — i.e., as a “professor”. If we required all faculty to teach at least 3-4 (real) courses per year, the need for non-FTE lecturers would be greatly reduced if not eliminated. But, we continue to allow faculty to do everything in their power to avoid teaching (particularly undergraduate classes). As ONE example, in one department, 4-5 of recent hires currently teach ONE course this academic year. This ostensibly is to attract candidates from peer competitors, and to… Read more »