The Daily Nexus
Sign of the Times
The Language of Liberalism
September 3, 2021 at 9:00 am by Syd Haupt 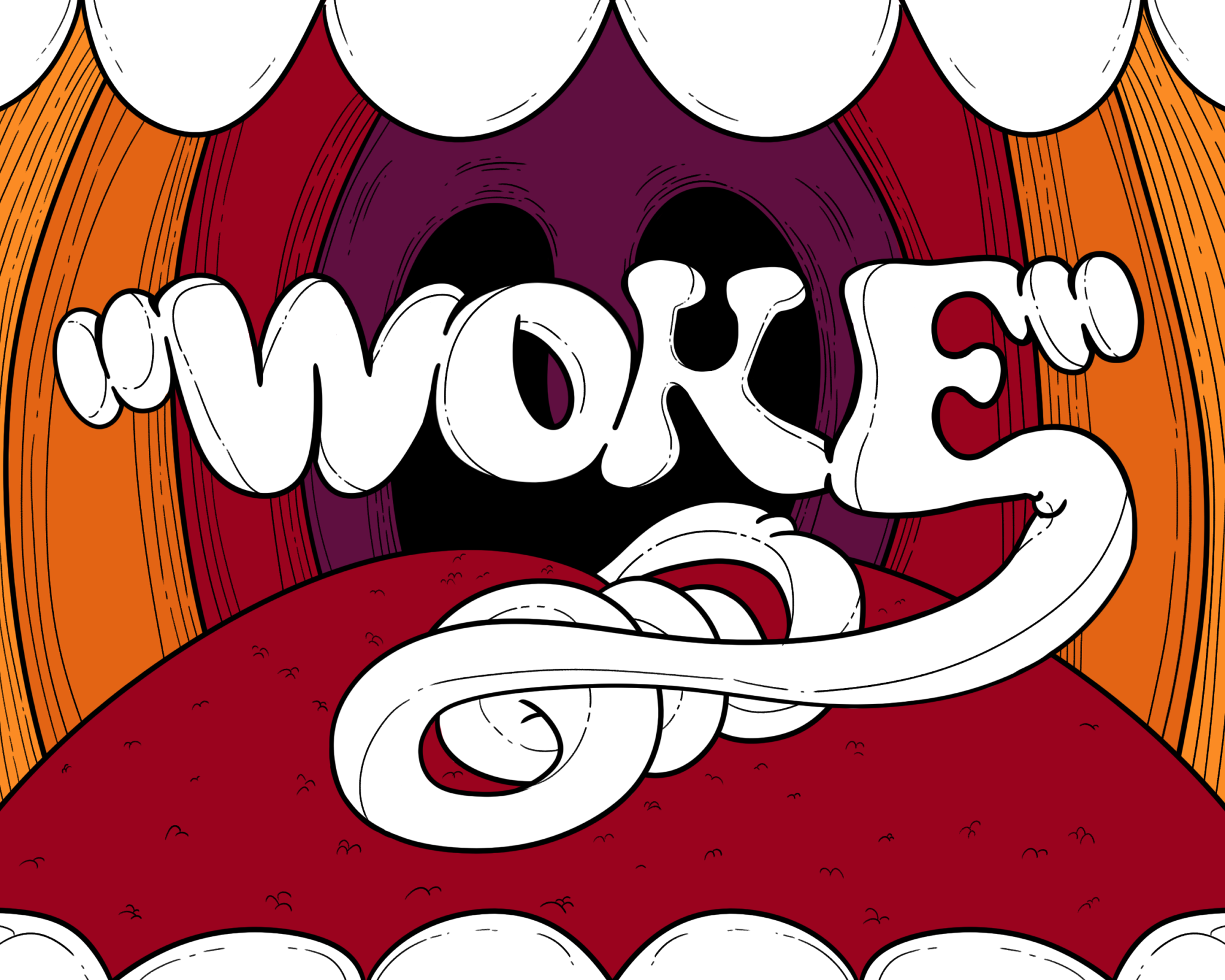 Over the past year, I’ve watched a variety of terms go from tiny propositions to subjects of huge discourse that are regularly utilized by everyday people and mass corporations alike.

You are likely familiar with some of these terms —“folx,” “womxn,” “Latinx,” “houseless,” “BIPOC” and many more. They clog up our Instagram feeds, fill up Twitter threads and even pop up in official emails from our university.

An email from UC Santa Barbara Career Services via Handshake on Feb. 21, 2021.

A new language has been formed, one created and used with the belief that it constructs a more understanding, safe and welcoming environment for the people it claims to serve. However, this language has a plethora of issues, beginning with one that we see on social media almost every day: It has — perhaps inadvertently — created a sect of people who see this terminology as the ultimate factor in determining whether or not the people, organizations, companies and governments in their lives are “woke.”

More often than not, the people who use this terminology are those who identify as liberals or whose views fall into the realm of liberalism, and once they have this language, they use it as a litmus test to determine whether those around them are serious about social causes.

This is a real shame, exemplified in terms like “BIPOC” (Black, Indigenous, People of Color). Attempts at explaining “BIPOC” to my Japanese relatives ends with them simply blinking at me in confusion. My aunties were raised in an era where they were described as “colored” or “Oriental.” They’ve barely begun to grasp the new label of “POC” (People of Color). But would you look these 60-year-old women in the eyes and tell them they are wrong for not understanding and immediately applying the term “BIPOC”? Language evolves so quickly that it is a mistake to shun people simply because they fail to use a fleeting term, especially those with valuable insight to share, like my aunties, whose lived experiences in post-WWII America have shaped my understanding of racism.

Additionally, many of the people who belong to these minority groups are entirely averse to this language.

For example, the term “womxn” was proposed with the intention of including trans and genderqueer women. However, trans women are quick to point out that adding the “x” to women simply further alienates them by denying that they are true women after all. Rather than calling them by their deserved title, “women,” the term “womxn” relegates trans women to being a sort of woman-tangent, never a “true” woman.

Language evolves so quickly that it is a mistake to shun people simply because they fail to use a fleeting term, especially those with valuable insight to share, like my aunties, whose lived experiences in post-WWII America have shaped my understanding of racism.

And perhaps the most glaring problem with terminology like this is that the effort to stand up for trans women, people of color, homeless people, etc., often ends at this utilization of inclusive language.

Rather than taking a further step to fight injustice within laws and community spaces or to support local organizations that fight these problems, people seem to think that using this language is enough — that they can stop there and then it puts them beyond racism, beyond sexism, beyond cancellation. Surely someone so woke as to refer to homeless people as their “houseless neighbors” could never do any wrong.

One prime example of this is a recent comment from President Joe Biden (which was, in my opinion, a deeply telling moment as far as Biden’s understanding of human rights goes). In a July press conference discussing the importance of adults getting vaccinated, Biden was quoted as saying, “It’s awful hard, as well, to get Latinx vaccinated as well. Why? They’re worried that they’ll be vaccinated and deported.”

Is there anything that sums up misguided American politics more than those few sentences? Those phrases utterly stereotype and demean an entire group of people in mere seconds.

But one cannot deny that Biden really thought he did something. He took his inclusion of “woke” terminology to mean that he was above racism — that everyone would accept his statement as truth, or at least as harmless, because he had done the unthinkable! The brave Biden had integrated the internet-speak term “Latinx” into a real press conference, broadcasting it to millions of American households that would now be exposed to a new idea.

He did not even realize that he really has no right to use this terminology. As Biden has little experience within the Latin American community and no real background in social advocacy, this usage of the term does not feel earnest in the slightest. And, when used in tandem with overt prejudice, his words take a condescending tone. Whether intentional or not, Biden has now seemingly weaponized a term whose original purpose was to uplift and empower.

That’s the very problem with this language.

Because he utilized a fun little “woke” term, Biden felt no pressure to amend his statements or confront his racist way of explaining vaccination issues in the United States. He believed that he had provided an excellent answer to questions about U.S. vaccination statistics. He didn’t think about examining how these communities statistically have less access to vaccines or mentioning how misinformation about the COVID-19 vaccine is rampant throughout the U.S.

No, he instead blamed it on a racist and inflammatory thought that the famously faulty Biden brain machine cooked up (amongst many other great ideas, like voting in favor of using force in Iraq in 2002, relentlessly bombing Syria in February of 2021 and authorizing the notorious 1994 crime bill that perpetuated mass incarceration).

Finally, it’s worth noting that these terms often originated in small communities who had extremely specific purposes for them. Unfortunately, these definitions have been significantly altered over time, largely due to the spreading of misinformation on the internet. For example, a 2020 article from Shape defined the term “folx” as being “used to specifically display inclusion of gender-queer, transgender and agender folks.”

However, back in 2014, the term “folx” was mainly utilized by grassroots organizations to designate “People organizing and theorizing in queer, trans, and other people of color.” This term has gone from highlighting community organization to being thrown around as a replacement for the already-genderless term “folks” in an effort to highlight one’s “wokeness.”

The danger with this vocabulary is not merely that it needlessly excludes those who do not utilize it or that it excuses people from internal examination — it is that it robs the communities it claims to protect of language that was special to them. In making it mainstream, the internet has corrupted its meaning.

This terminology is dangerous. It excuses people from examining their own possibly racist internal biases. It creates infighting within the left as people disagree about the value and usage of this new vocabulary. And much of its mainstream use is only a shallow imitation of its original purpose.

Rather than falling into the trap of obsessing over the language of liberalism, the left needs to come together and focus on what has always been the most important thing: improving the quality of life for people around us with strong action. Settling for words alone is, frankly, dangerous.

Syd Haupt couldn’t care less about the term “BIPOC” and seriously thinks everyone’s efforts would be better put towards donating to J-TOWN Action and Solidarity.

I liked where this article went and think that all this language just creates more infighting and a distraction from actually improving the lives of minority communities and focusing on real problems within the Democratic Party and the left. However I think you were too harsh on Biden and somehow roped in to totally unrelated criticism of his “voting in favor of using force in Iraq.” But Biden bashing seems to be in vogue now so I guess it’s not a big deal.
Love the artwork as well.

I’m confused by how you explained how “folx” was co-opted, but didn’t do the same for “BIPOC.” It’s not a problematic term like “womxn” and no one is going to cancel your relatives for not knowing what it means. It’s to highlight the anti-Blackness and indigenous genocide this country was founded on, so Black and Indigenous people are emphasized first when talking about issues of race. so saying “you could care less” about the term is very… odd

Cannonball contest in the lagoon

Sword fight (to the death) to become the next chancellor

Campus tour but the guide only communicated via kazoo toots

Taking the red pill to escape the simulation