The Daily Nexus
Sign of the Times
The Transformation of Men Through Glam
July 1, 2021 at 9:00 am by Megan Ramsey 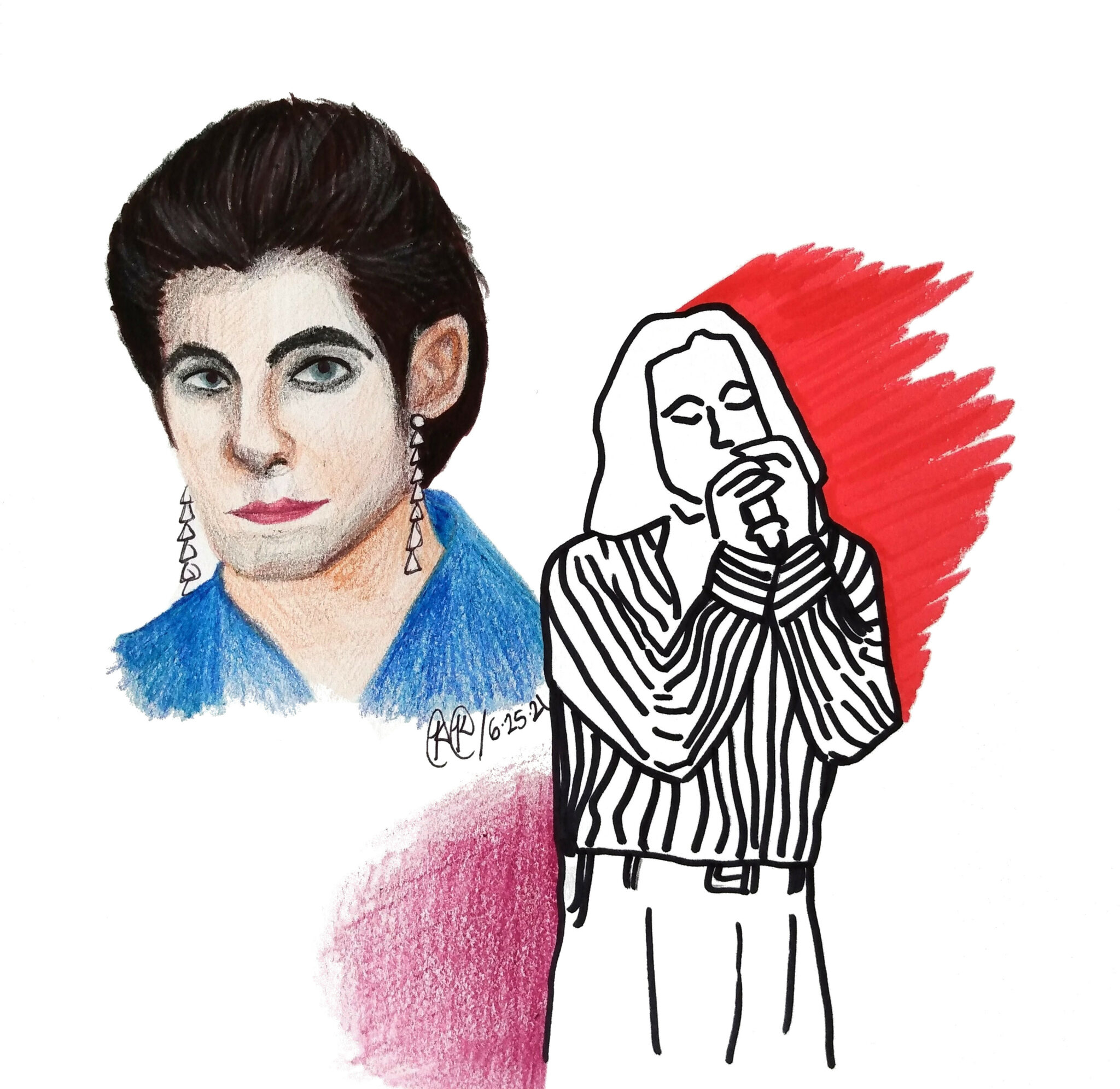 There’s an alluringly dark look in Damiano David’s black-lined eyes that’s almost like a challenge. He’s not your prototypical masculine man in music. David looks like he was hewn by an ancient Roman god of rock and roll — and sex. When I think of a sex symbol, I think of David. He has donned corsets, skirts, bondage harnesses and heels. His band, Måneskin, is pushing boundaries and bringing a modernized glam rock into the limelight.

David is the lead singer of Måneskin, the Italian rock band that won Eurovision on May 22, 2021. Måneskin was formed in 2016 by classmates David (vocals), Victoria De Angelis (bass), Ethan Torchio (drums) and Thomas Raggi (guitar). Their surge to popularity hopefully marks a resurgence era of rock. Glam rock, mainly characterized by flamboyance of style, surfaced in the ’70s with artists like Queen and David Bowie. While many of the artists I characterize as glam rock used their ambiguous, flamboyant dress as a form of expression for their sexuality, Måneskin is normalizing a more gender-fluid presentation.

Måneskin could care less about social constructs. Everything about them is art — adding to the modern reckoning with traditionality.

Rock has traditionally been a man’s game, gatekept by male fans and artists. As a result, the first artists that pop into my head when I think of rock are The Beatles, The Rolling Stones, AC/DC or Led Zeppelin, not The Runaways, Pat Benetar or even Queen. There’s nothing spectacular about how the traditional men in rock dress. It doesn’t detract from their talent, but creativity in fashion amplifies a band and draws more attention to it, allowing them to make a statement. It’s unexpected to see femininity and sexual ambiguity in such a male dominated industry. The birth of glam rock made ambiguous dress a hallmark of musicians like Bowie, Marc Bolan and Freddie Mercury. This was a new form of expression that damned the constructs and boundaries of rock and the norm. This transcendence of what men were expected to look like created charisma and confidence that are evoked by Måneskin today, appealing to an anti-male gaze.

Måneskin could care less about social constructs. Everything about them is art — adding to the modern reckoning with traditionality. De Angelis has talked about Måneskin’s propensity to express freedom through their style. These 20-year-olds are embodying the Gen-Z tendency for nonconformity and a distaste for machismo’s objectification of women and hindrance of men’s actions and appearance. The way they present themselves is a visual treat. The element of glam that Måneskin has achieved is something that helped immortalize Mercury. The matching sequin catsuits they’ve worn demand attention and make them completely badass.

The confidence and nonconformity of Måneskin’s wardrobe choices are reminiscent of Nirvana’s dress wearing statements and Mercury and Elton John’s extravagant styles. There is something so powerful — and sexy — about a man who can pull off a skirt or dress. The way that Måneskin incorporates gender-bending fashion is tantalizing and only adds to their sex appeal. After donning a plaid pleated mini skirt, David echoed Kurt Cobain’s attitude that a man in “women’s” wear shouldn’t be controversial. David’s style is eye-catching and Måneskin’s fashion is captivating, especially while they perform. The whole band has a fluidity of movement and appearance. They are extremely expressive in how they perform and their outfits lend to their fluidity and authenticity. They have me completely hooked, so much so that I impulse bought a ticket to see them play in Italy.

Masculinity shouldn’t be defined by what someone wears, nor should it be an expected characteristic of art.

As far as I’m concerned, the appeal for overtly straight and overly “manly” men will soon be coming to an end. I’m sick of seeing bland men doing the same thing over and over again and having the male gaze dictate the men’s style that is supposed to appeal to women. Men try to adhere to this rough, macho personna rather than one of beauty and expression. Masculinity shouldn’t be defined by what someone wears, nor should it be an expected characteristic of art. Look at male sex symbols that have outlasted time; they’re men like Bowie, not men like Bon Jovi.

People’s “Sexiest Man Alive” wearing jeans and a t-shirt is mundane. Even a black suit and tie gets boring. I want to see more experimentation, intrigue and ambiguity with men that are so comfortable with themselves that they can wear anything, like Ezra Miller or Young Thug who stray from society’s dress code. Måneskin goes for a ’70s take on a suit by adding color, bell-bottoms and makeup. There’s a spirit and sensuality. They’re starting a conversation and to me that means they’re doing something new and right.

It seems like only different versions of the same factory-made stars shoot to popularity within the U.S., leaving no room for originality, only what sells. The glam of Mercury has always been controversial and exciting. Take the reactions to Harry Styles in a dress as an example. People like Ben Shapiro thought this was a breach of masculinity in the same way that conservatives and Christians have been affronted by Lil Nas X’s “Montero (Call Me By Your Name).” Seeing a man like David in eyeliner, heels and ear and nipple piercings is refreshing. It shows that he is comfortable with his masculinity, he’s stylish and he’s in touch with his femininity, all while deconstructing toxic masculinity. David’s gender-bending, pretty boy look adds to his status as an iconic bad boy. I’d choose him over Adam Levine anyday.

Måneskin’s conversion of glam rock into a modern rock look, while creating global hits is going to make them eternal. They have set themselves apart from other rock bands today that capitalize off of a grunge look. Combining an enthralling look with musical talent is what has made musicians like Bowie idols. Måneskin’s individuality is adding to the modern deconstruction of gender norms. Nothing limits them and they make a point of showing how unhindered they are.

Megan Ramsey believes that all men should take some fashion inspiration from the feminine.

Megan Ramsey
Megan likes grapes and chocolate, especially if they are fed to her. If she could, she would spend her days buying fancy dresses and running through her French mansion garden.