The UC Santa Barbara student who was arrested on Nov. 6 after allegedly assaulting multiple individuals in Isla Vista while yelling homophobic slurs was also arrested in late 2015 on a felony assault charge for the beating of a rival frat member at the University of Mississippi, according to the Mississippi police department that arrested him. 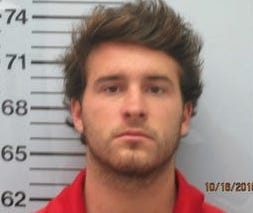 The Nexus confirmed through identifying information provided by the University of Mississippi Police Department that the 22-year-old student, Tucker Steil, was the same individual who had been arrested in 2015 on assault charges – a case publicized in the media because all the individuals involved, except Steil, had been smiling in their booking photos.

Steil did not respond to multiple requests for comment.

Steil, who is currently a third-year transfer at UCSB, was in his first year of college at the University of Mississippi and 18 years old when he was arrested on Oct. 16, 2015, Fox News reported. The crime description under Steil’s portion of the incident report described the method of assault as “Hands, fists, feet, etc. Aggravated injury,” the Clarion Ledger Reported.

The victim of the beating suffered a concussion, several broken teeth, a ruptured eardrum and a lung contusion, Fox News reported. Steil, along with four other freshmen members of the Pi Kappa Alpha fraternity, was arrested. However, Steil was the only suspect to receive a felony charge and posted a $10,000 bail after his arrest.

Following the October 2015 arrests, all five fraternity members involved in the altercation were removed from Pi Kappa Alpha, WAPT reported.

In April 2016, four of the five suspects had their charges dropped after the state failed to meet the “burden of proof” requirement to convict them, except for Steil, whose case continued, the Clarion Ledger reported.

Steil’s case was eventually reduced to a misdemeanor, and he paid a fine of $332.25, according to information provided by the Lafayette County Justice Court.

In Isla Vista, Steil was arrested in early November for three misdemeanor charges of battery, public intoxication and fighting in a public place following an altercation in which he allegedly assaulted multiple individuals while shouting homophobic slurs.

A person who identified themselves as one of the victims of the incident posted on Twitter detailing their injuries, stating they had suffered a concussion, a fractured nose and three broken teeth and received seven stitches.

Steil is scheduled to be a part-time student for Winter Quarter 2020, according to student verification logs.

Of course he was in PIKE

Stop voting for weak on crime politicians and weak on crime propositions. Look at the Governor reversing the death sentence and releasing murders before their sentence is complete. Think about crime policy before party allegiances.

Did you even read the article? The original crime for which he was given a slap on the wrist for occurred in Mississippi. Maybe if they had actually treated his crime more seriously he would have learned his lesson and not found himself committing the same mistakes in California 4 years later. On face value, the Mississippi court failed him as well if they didn’t order him to take substance abuse counseling and anger management courses in addition to a proper punishment that would make him rethink his actions and behavior. I don’t know what happened in Tucker’s life to… Read more »

Many UCSB students graduate with prior misdemeanor charges and/or convictions. That would be an interesting list to see. But I doubt UCSB would allow that stat to be published

It’s public record. You can look it up yourself.

Why didn’t these people fight back and defend themselves? Tucker is no “Bones” Jones.