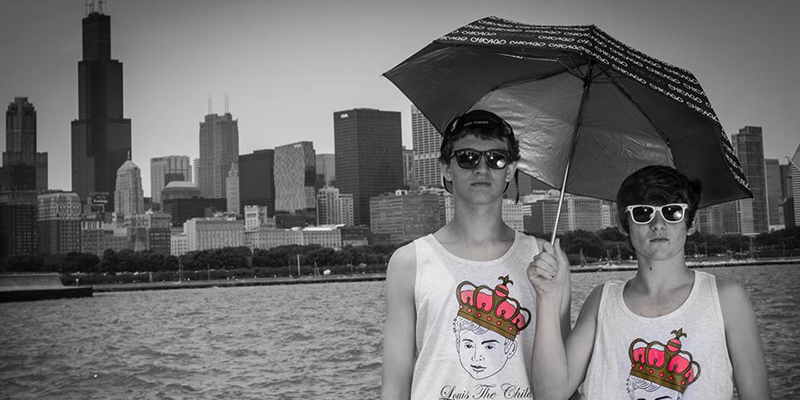 Dressed in a light pink sweatshirt underneath the warmth of a Northface jacket, Robby Hauldren, one half of the up-and-coming electronic DJ duo Louis the Child, met up to chat with Artsweek. Born and raised in the windy city of Chicago, Hauldren and his band mate Freddy Kennett started making music when they were teenagers in high school. “Freddy was making dubstep under the name ‘Fatboy,’” the Illinois native explained. “I was making mashups under the name ‘Hall Pass’ because my last name’s Haudren.”

At chance meeting at a Madeon concert, the two boys became fast friends. After learning that they shared the same interest in electronic music, the new acquaintances decided to work together. By the time the aspiring artists made some real music, the two began to gain support from friends on Facebook, leading them to hire a manager who encouraged the young DJs to send their music to various online blogs. From then on, listeners on SoundCloud built huge support for the boys. With thousands of plays on their remixes, famed EDM artists such as Madeon and The Chainsmokers noticed the DJ-ing duo and asked the two to open for them on their tours.

“It’s crazy because this past year, we toured with Madeon in the spring and fall. The whole ‘come full circle’ was like, we met at a Madeon concert and we got to go on tour with him.” Hauldren shared about his experience with famed EDM artist, “He has helped us out so much with incredible advice. He’s one of those people who [is] a very genuine artist who cares a lot about his craft. It’s good to get advice from him of all people.”

The 19-year-old Hauldren is currently a student at University of Southern California. Kennett, who’s a year younger, plans to join his friend in Los Angeles after graduating high school this forthcoming June. Balancing being a DJ and a student simultaneously does not seem to bother the college sophomore.

“I’m a student during the week and a DJ on the weekends. Every weekend on Fridays, I fly out, and Sundays, I come back and find time for my studies,” Hauldren shared.

Even with a network of fans all around the world, the young music producer is shocked at the amount of recognition at his school. “I was very pleasantly surprised at going to school and meeting a lot of kids who already knew my music. It’s really eye-opening because, back in my high school, kids know my music because I go to school with them,” the USC student said. “And then to go somewhere completely different and see that all these kids from these different places also know your music and know all of our friends’ music is crazy.”

In the fall of 2015, Louis the Child dropped their first original record, “It’s Strange (ft. K Flay).” The song was immediately played by millions of listeners and became a critical success. One notable fan was pop music sensation Taylor Swift, who recently shared an Instagram photo of a list of her current music obsessions. The last song on the list was none other than the duo’s debut record.

“It like still hasn’t hit me. Even the fact that the thought that she even heard of our song — just that it’s gone through her ears — is crazy in itself, but then she likes it enough herself to say, like, ‘Hey, I want other people to hear this and I think it’s a song that will make your life more awesome,’ is the craziest thing,” Hauldren said.

For the young artist, 2015 was the beginning of many achievements. “Overall, the success of ‘It’s Strange’ — none of us expected it to do as well as it did and it’s crazy the support that it’s gotten from our friends at blogs and our other DJ friends, and Taylor Swift and Lorde tweeting out about it. I’d say ‘It’s Strange’ is a huge highlight of 2015.” As for the coming year, the music producer is looking forward to possibly releasing a debut EP. “We got a lot more touring. We got a lot of really, really big, good festivals booked up right now that I’m super excited about,” the Chicago native shared. “We’re trying to get out an EP as soon as possible within the next couple months, so definitely an EP in early 2016 and a lot of touring and festivals.”

With a headlining feature at SnowGlobe under his belt and a future performance at Coachella in the spring, Robby Hauldren is enjoying his newfound success with his best friend. Louis The Child is regarded as one of the electronic DJs to watch, and it’s just a matter of time before the two Chicago boys will be headlining sold out festivals all around the world.